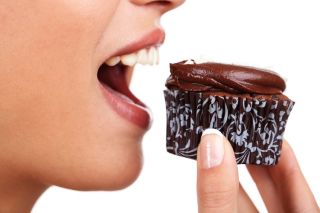 After a long day at work, it can be hard to resist the call of ice cream from the freezer. But some people are better than others at ignoring that call, and new research suggests the difference has to do with brain activity.

Scientists already know a lot about why willpower fails, but not much is known about why some people have more self-control than others. In the new study, researchers found that regions in the brain associated with reward and self-control would light up with activity when people looked at images of high-fat, tempting foods. The researchers could even predict the strength of a person's food cravings, the likelihood they would act on those cravings and the amount they would eat after giving in to the temptation — all just by looking at the brain-activity levels.

"People are not aware entirely of how much these cues can affect their cravings," Rich Lopez, a doctoral student at the Center for Cognitive Neuroscience Lab at Dartmouth College in New Hampshire, told Live Science. "In the future, it could help inform clinicians how to help people with eating disorders or how to help people who struggle with diet in general." [Stick to a Diet: 4 Tips for Strengthening Willpower]

The team recruited 31 female volunteers for the study. Lopez said they used a group of same-gender volunteers, because they first wanted to test if a relationship existed between brain activity and cravings at all. Follow-up studies will likely include men as well as women to test for differences in gender.

The participants got initial fMRI scans while they were presented with a series of pictures. Half of the pictures showed high-calorie and high-fat foods, like cheeseburgers, french fries and desserts. The rest of the images were of things such as people and nature scenes.

Then, during the next week, participants received a text message a few times a day on their phones, asking them to report their food desires and eating behavior. If they were having a craving, the researchers asked them to describe the craving, its intensity and whether they gave in to it.

Lopez said that future research in this field will likely revolve around techniques to help people improve their self-control. Other labs are already investigating techniques — such as mindful meditation and getting people to change the way they think about their cravings in the moment — as possible ways to improve self-control.

Future research could also investigate how brain regions associated with reward and self-control could predict other addictive behaviors, such as binge drinking, gambling and risky sexual behavior.