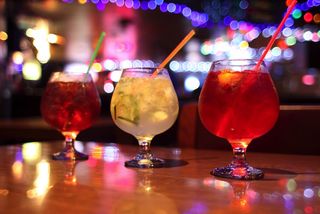 Australian researchers found that young adults who consumed an energy drink mixed with alcohol had a small to moderate increase in their desire to keep drinking compared with people who drank alcohol alone.

"This is an important finding because it provides evidence of a mechanism through which energy drinks may increase binge drinking, and consequently, alcohol-related harm among young people," said study author Rebecca McKetin, who leads the substance use research group at The Australian National University in Canberra.

Those harms might include greater alcohol intoxication, and an increased risk of automobile accidents, as well as drinking-related injuries from fights or falls, McKetin said.

Blending an energy drink with alcohol is a popular trend among college students, leading researchers to wonder about the potential dangers associated with it. [5 Health Problems Linked to Energy Drinks]

Before receiving their cocktails, all the participants completed a questionnaire asking them to describe their typical use of alcohol, caffeine and drugs. Ten minutes after sipping their cocktail, the participants filled out a post-test questionnaire rating the drink's taste and its effects on them, and then took a breathalyzer test to measure their blood alcohol concentrations.

The findings are published online today (July 17) in the journal Alcoholism: Clinical and Experimental Research.

The results showed that young people who drank alcohol plus the energy drink liked the taste better, had lower average blood alcohol levels, and also reported a greater urge to keep drinking than those given the alcohol-only cocktail.

As for the possible mechanism behind the increased desire to drink more when combining energy drinks with alcohol, McKetin identified two potential culprits: caffeine and sugar.

She explained that the sugary additives in energy drinks contribute to their palatability, and may increase people's desire to keep drinking. Another reason could be the caffeine content, which might bring out alcohol's stimulant effects and is strongly related to how much people like alcohol.

"In our study, we were unable to confirm whether or not people's desire to keep drinking was due to the sweetness of the energy drink, or the caffeine that it contained," McKetin told LiveScience.

A similar study done in the U.S. suggested it was the caffeine rather than the sweetness that caused the effect, she said.

Some other unanswered questions are whether and to what extent combining energy drinks with alcohol increases how much alcohol people actually subsequently drink, McKetin said.

Researchers can't assume that a person's self-reported urge to keep drinking would result in consuming more alcohol in a real-life situation, she said. Factors such as whether someone has the money to spend on buying more alcohol, if their friends are still drinking, and whether that individual needs to drive home or go to work the next day, can all play a role in the decision to keep drinking, or stop, McKetin said.