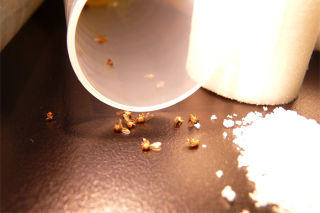 Could an ingredient in sugar substitute Truvia work as an insecticide?
(Image: © Kaitlyn Baudier )

Simon Kashchock-Marenda was in the sixth grade when he decided to study the effects of various sweeteners on the health of fruit flies (Drosophila melanogaster) for a science fair project. With help and supplies from his father, Daniel Marenda, an assistant professor of biology at Drexel University in Philadelphia, Penn., Simon began raising groups of flies — feeding each group a different store-bought sweetener. One of the sweeteners was Truvia® — an FDA-approved sweetener that contains erythritol, a sugar alcohol present in many plants and fruits.

After just six days, all of the flies raised on Truvia® had died.  Simon and his father — along with Sean O’Donnell, a Drexel biology professor with a background in insects — then replicated the experiment under stricter conditions, in a lab.

With more investigation, the research group found that erythritol provided the toxic effect, not a stevia plant extract also present in Truvia. More testing is needed to determine the specific physiological and molecular mechanisms of erythritol’s toxicity to fruit flies, the researchers said.

The study also found that flies were drawn to erythritol-containing Truvia over Equal, Splenda, Sweet’n’Low, and PureVia, which they also tested.

These results suggest that erythritol may provide an additional use as a human-safe insecticide.

But just how erythritol might one day be used to fight insect pests is unclear. “We are not going to see the planet sprayed with erythritol and the chances for widespread crop application are slim,” O’Donnell said. “But on a small scale, in places where insects will come to a bait, consume it and die, this could be huge.”

The discovery came as a complete surprise, said O’Donnell. Everyone regarded the study Kashchock-Marenda initiated as a “standard middle school science project,” he said. “This is a great example of simple studies leading to real advances.”  But there is no way to know when payoffs of this kind will happen in basic research, he added. [What is STEM Education? ]

In June 2014, the results of the erythritol study were published in PLOS ONE — with Kashchock-Marenda, now in the ninth grade, Marenda and several other researchers cited as co-authors, and O’Donnell cited as a senior author.

“I think it’s hard to overemphasize [the benefit of] promoting curiosity and encouraging kids to get involved in science at a young age,” said O’Donnell. “The takeaway here is not that every science fair project can be a real discovery, but rather that you never know what it might lead to down the road. In general, having students engaged in and comfortable with science can enable them to make discoveries in future.”