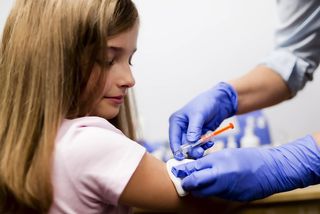 Serious reactions to vaccines are rare among children, according to a new review of vaccine safety in kids, which also refutes any link between vaccines and autism.

The findings "should be reassuring to parents of young children and to the clinicians who care for them," said Dr. Carrie Byington, of the University of Utah's Department of Pediatrics, writing in an editorial accompanying the review.

Vaccines have played a crucial role in eradicating some infectious diseases, and controlling rates of others, including smallpox, polio and measles, the review said. Yet the number of parents who hesitate to vaccinate their children has increased in recent years. Exemptions from vaccines, for personal beliefs, have been linked with outbreaks of infections such as measles, the editorial said.

In 2011, the Institute of Medicine (IOM) reviewed the safety of eight different vaccines, and concluded that serious side effects from the vaccines are extremely rare. The new review, conducted by researchers at the RAND Corporation, updates those findings by evaluating studies published since the release of the IOM report, and addressing side effects of several vaccines not included in the previous report. [5 Dangerous Vaccination Myths]

But these reactions are extremely rare, the researchers said. For example, the rotavirus vaccine RotaTeq was linked with 15 extra cases of intussusception per 1 million doses of the vaccine, the review said. And between 3,000 and 4,000 children get the MMR vaccine  for every one extra case of a fever-triggered seizure, according to the IOM report.

"Fortunately, the adverse events identified by the authors were rare, and in most cases, would be expected to resolve completely after the acute event," the editorial said. "This contrasts starkly with the natural infections that vaccines are designed to prevent, which may reduce the quality of life through permanent morbidities, such as blindness, deafness, developmental delay, epilepsy, or paralysis and may also result in death."

The review also adds to the numerous studies that have refuted the link between autism and the MMR vaccine. The link was proposed in a 1998 paper that has since been not only widely discredited, but also shown to be fraudulent.

The review is published today (July 1) in the journal Pediatrics.