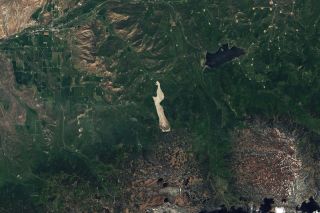 An image taken on June 7, 2014, by Landsat 8 shows a landslide that rushed through a remote part of western Colorado, partially covering up a natural gas well.
(Image: © NASA's Earth Observatory)

The menacing trail of a landslide that killed three people in western Colorado last month can be seen from space.

A new satellite image of the slide's scar, taken on June 7 by the planet-watching spacecraft Landsat 8, was released today (June 20) by NASA's Earth Observatory.

The May 25 disaster sent a wall of mud, as deep as 250 feet (76 meters), barreling down a mountainside near the town of Collbran in Colorado's Grand Mesa area, a region prone to landslides. The slide shook the surrounding area, and was even recorded by seismographic sensors; it registered as a small, 2.8-magnitude earthquake, according to the U.S. Geological Survey.

The disaster killed three men and left a trail of destruction more than 3 miles (4.8 kilometers) long and a half-mile (0.8 km) wide, The Denver Post reported.

Landsat 8, which launched into space in February 2013, is the newest satellite in the prolific Landsat program, a joint effort by NASA and the U.S. Geological Survey that started in 1972 to monitor the changing face of Earth.

The satellites' watchful gaze has helped document natural disasters. Landsat 5, for example, captured an image of a fatal tornado's path in western Massachusetts in 2011. Landsat 8 captured before-and-after photos of the deadly landslide that struck Washington state this past March. That Washington landslide buried homes and killed more than 40 people as an unstable hillside gave way on the bank of the Stillaguamish River.