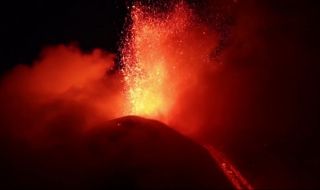 Lava fountained in the air and flowed down Etna's flanks from its New Southeast crater. The lava flowed and spread into the Valle del Bove. Ash from the eruption closed nearby Catania Airport in Sicily, but no injuries or other closures have been reported, according to the BBC.

Mount Etna is the largest active volcano in Europe and one of the world's most frequently erupting volcanoes. The stunning eruptions at Etna often come to life in short, violent bursts called paroxysms. Mount's Etna's outbursts produce enough lava each year to fill Chicago's Willis Tower (the former Sears Tower), a 2012 study found.

Etna's last major eruption was in 1992, but the volcano belches lava every year. Though the first historic Etna eruption dates back to 1500 B.C., the volcano is actually much older, with the first lava flows pouring out 500,000 years ago. Geologists can analyze elements in Etna's rocks to precisely date when they emerged from the volcano.