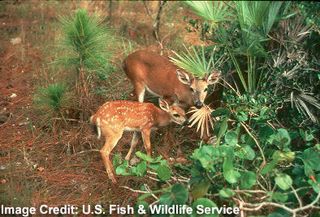 Karen Lange is senior writer for All Animals, the membership magazine of The Humane Society of the United States. This article was adapted from one that appeared in All Animals. Lange contributed this article to Live Science's Expert Voices: Op-Ed & Insights.

Meet Enid Feinberg, deer lover and protector, an activist who scans the woods around her house with surveillance cameras, looking for hunters.

And meet Anthony DeNicola, deer culler and sharpshooter, a wildlife biologist who runs a business that until recently focused on killing deer.

In the Baltimore suburbs, a new method of controlling deer populations has brought the two together: deer sterilization, or removing does’ ovaries.

By now, DeNicola is like an old friend. He arrives with laundry from another deer sterilization job and takes bags of equipment up to a rec room without Feinberg having to point the way. Then he spends days darting the does with a tranquilizer so that they can be rushed to Feinberg's garage and sterilized in a makeshift operating theater. After the 30-minute procedure, does are returned to the woods. These days, eight of 10 does spotted around Feinberg's house have already had the procedure, and will never become pregnant again.

It used to be that communities where deer eat gardens or dart in front of cars had few options but to recruit hunters or hire professionals like DeNicola to kill deer. Such culls must occur year after year for deer population reductions to last more than a period of months. Each cull removes a high percentage of the population, but surviving female deer continue to reproduce, while outside deer move in to replace those culled. [Contraception May Save Future Elephants from Culling ]

Today, after decades of research, scientists and animal advocates believe nonlethal methods to reduce the deer population are ready for widespread adoption. These include surgical sterilization and the contraceptive vaccine PZP, which causes a doe to produce antibodies that bind to her eggs' outer membranes, preventing sperm from entering.

These techniques can cost less than $500 per animal — no more than shooting a deer, if you consider the expense of processing the meat.

In Fairfax City, Va., when a proposal to allow hunting failed to gain enough votes, the city council decided to try sterilization. This past winter, right before he visited Feinberg, DeNicola drove slowly through the parks of this Washington, D.C., suburb, darting does. Surgery took place in the police station, where DeNicola's partner, Wisconsin veterinarian Steve Timm, trained local vets eager to learn the procedure.

On Fripp Island, S.C., a plan to cull deer foundered when a retired judge who owns a house there threatened to sue. So residents of the resort community invited The HSUS to treat the deer with PZP. Within five years, the number of deer fell by half.

The village of Hastings-on-Hudson, N.Y., just north of New York City, considered hiring experts to trap deer in nets, then kill them by shooting bolts into their heads. But when the mayor imagined the backlash of people seeing panicked deer breaking legs or antlers fighting to get free, he looked for an alternative. This past winter, HSUS staff began treating deer there with PZP.

This effort is the first time the contraceptive has been tried in an open system — rather than an island or a fenced campus — making it a crucial test, says Tufts University professor Allen Rutberg, a former HSUS staffer. "If it does work there [in Hastings on Hudson]… it will work in a lot of other places," he says.

Now, animal welfare advocates are offering PZP and sterilization to communities on eastern Long Island, where, after protests, officials there abandoned a plan to hire the federal Wildlife Services agency to kill thousands of deer.

The important thing is to have humane options, says Stephanie Boyles Griffin, HSUS senior director of Innovative Wildlife Management & Services. In Washington, D.C.'s Rock Creek Park, where Wildlife Services sharpshooters have finished a second winter of killing deer, Boyles Griffin hopes the National Park Service will switch to fertility control in the future.  “It will save a lot of lives,” she says.

This article was adapted from "Out of Season" in All Animals. Follow all of the Expert Voices issues and debates — and become part of the discussion — on Facebook, Twitter and Google +. The views expressed are those of the author and do not necessarily reflect the views of the publisher. This version of the article was originally published on Live Science.