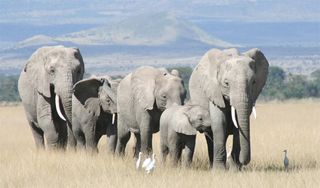 In South Africa they have a problem, a big one: too many elephants.

For most of the 1900s extensive poaching threatened to wipe out the country’s elephants. In response, conservationists established reserves throughout the region and relocated as many herds as they could. Now those herds are doing quite well. So well, in fact, that they’re causing problems. Wildlife managers are currently facing a dilemma: how to deal with too many elephants. While some advocate for culling the giants, a group of scientists has outlined a different plan to control their populations: contraception.

Rather than simply setting a quota and culling the extras, immunocontraception could be a tool to allow land managers to control elephant populations in response to conditions on the ground such as food availability. "The approach now has to be much more dynamic and look at the influence the animals are having on the land," says Robert Slotow, a biologist at the Amarula Elephant Research Program in Durban, South Africa. His team recently published a paper in PLoS ONE describing how scientists might be able to use immunocontraception—a vaccine that gets the body to make antibodies that target sperm receptors on the surface of the egg cell. Slotow and his team outlined an immunocontraception schedule that would halt the growth of herds in a South African park and even out their population structure.

In the wild, two things control elephant populations: natural mortality and environmental conditions. Calves and full-grown animals get sick and die from all kinds of things, from predation to viruses. And when the environment is unfavorable–during years of drought or food shortages, for instance–females will put off having babies. In closed systems like conservation parks, however, neither of those controls is in place. The fences around the park keep out new animals and pathogens, and controlled park conditions make sure that there is ample food. Mothers keep having babies, and the death rate seems to slow to a crawl.

But simply letting the population boom isn’t an option either. Herds can reduce forests to grasslands by trampling plants and uprooting trees as they feed. There is concern that the elephants are pushing out other species. Kruger National Park, the oldest elephant reserve in South Africa, has about 15,000 elephants. The sustainable number estimated for the park is probably more like 7,500. One way that Kruger dealt with its growing population was to relocate juveniles to other parks in South Africa, which temporarily solved the problem in Kruger but created issues elsewhere. These smaller parks suddenly had a bunch of elephants that were all the same age, which leads to a young, fast-growing population. Now those smaller parks are having the same challenge–too many elephants.

In 2008 South Africa announced it would lift the 1994 ban on elephant culling to deal with increasing populations, although to date the cull has not happened. Culling itself is controversial: some argue it’s a way to utilize a resource and profit from the skin, meat and ivory provided by elephants, whereas others contend that the killing is barbaric and unnecessary.

“All these things that people want to talk about—deer gnawing on your shrubbery, culling elephants—they’re symptoms of the larger problem, which is reproduction,” says Jay Kirkpatrick, director of the Science and Conservation Center at ZooMontana and longtime advocate for immunocontracpetion. And if you want to curb reproduction, he says, contraception is one option.

The specific brand of immunocontraception used in elephants–and most other animals–is called the porcine zona pellucida vaccine, or PZP. Kirkpatrick makes PZP in his lab at ZooMontana. It's a labor-intensive process that involves chemically isolating the proteins from the egg cells of pigs. The vaccine is administered to animals by darts that can be shot from the ground or the air. Each dose of PZP costs about $35, $24 for the dose and $11 for the delivery system. For small herds the vaccines are delivered by darts shot from a car. Larger herds are often treated by helicopter. And scaling up could cut costs, Slotow says: "As with anything new, it costs more when you do it initially." He estimates that a single elephant could be treated for about $60 a year.

There are a few reasons why immunocontraception is an attractive solution for elephants. First, it's incredibly effective—the PZP vaccine has been tested in everything from stray cats to voles to African elephants. The effectiveness of the vaccine varies both within and between species because every animal, and every species, has a different immune system. For some animals, like cats and dogs, it doesn't work at all. For African elephants, it is 100 percent effective. In the past 16 years of immunizing elephants in South Africa, Kilpatrick says, not one breakthrough pregnancy has occurred.

Second, the vaccine affects only the sperm receptor, which means that it has no behavioral side effects. If male elephants are darted by accident, they won't be affected at all. Moreover, a female who is darted several times will have no side effects and still be protected from conception.

Questions remain about how continued contraception might influence such a social species, in which raising babies is an important part of herd bonding. If females are kept from calving for extended periods, might they become depressed? “You can’t not have babies indefinitely,” Slotow says. “That removes an element that’s important to elephants.”

Slotow's model allowed a calf into the herd intermittently, to keep the elephants happy. Even with the occasional birth, after 20 years of immunocontraception, the model showed that the age structure could indeed even out and population growth could be slowed. By doing so, you also decrease the amount you have to manipulate the herds through relocation or culling. "The more natural the population," Slotow says, "the less you have to interfere."

Using contraception in native populations is not a new idea. Kilpatrick and his team began looking into it about 40 years ago. But despite being effective in all kinds of species for which population control is important to keeping the animals from doing environmental damage, from white-tailed deer to wild horses, it is still not widely implemented. When culling was reopened as a possibility in Kruger in 2008, many said that more research needed to be done on immunocontraceptives. Since then, science has shown that the vaccine can offer a solution.

The question of culling is a complicated one. If managers decide to do it, they will have to decide how many elephants to take out, who to let in for the cull and what to do with the products afterward. Adults are most often targeted, and the juveniles and calves leftover are often relocated to other parks, decisions that can alter the number of elephants elsewhere and the social balance within those herds and continue the population problem. If managers do decide to take out elephants, culling can provide valuable resources to locals in the form of money from game hunters, hide, meat and ivory. But conservationists argue that killing the animals is morally wrong and would encourage poaching outside the reserves. They advocate for contraception and a reevaluation of just how many elephants the parks can hold.

Today, many game reserves, such as Makalali and Welgevonden, are considering using PZP. "It's becoming key to the extent that there is enough research that people can accept and understand the process," Slotow notes. Still, it won't bring the population down immediately. Immunocontraception can create long-term stability to avoid current troubles, but even if the parks started taking steps immediately, they would still have the problem of too many elephants now. "That's going to have its effect in 20 or 30 years," he says. "It's not about what's happening this year."