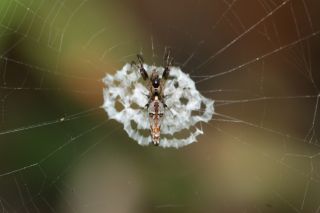 Orb-web spiders like this one camouflage themselves as bird droppings to avoid predators.
(Image: © Min-Hui Liu)

Many animals camouflage themselves to avoid being eaten by predators, but few are as strange as a spider that disguises itself as bird poop.

The orb-web spider's silver body and the white, silken, disclike decoration on its web give it an uncanny resemblance to bird droppings. The spiders may use this disguise to avoid being captured by predatory wasps, researchers say.

"These predators usually will form a search image to hunt for spiders, and [they] usually will not be interested in bird droppings," said lead study researcher I-Min Tso, a behavioral ecologist at the National Chung-Hsin University in Taiwan. [See Photos of Spiders Masquerading as Bird Droppings]

Masquerading is a phenomenon in which an animal's body color and shape mimic an inanimate object. The body coloration of many web-building spiders strikes a balance between being attractive to prey and hidden from predators. As part of their disguises, many spiders also add colorful decorations to their webs, called stabilimenta, made from prey carcasses, egg sacs, plant matter or silk.

For the orb-web spider (Cyclosa ginnaga), those silken web decorations could make its bird-feces costume even more believable. "Since orb-web spiders can make silks, such [an] adaptation may facilitate the bird-dropping masquerading of these spiders," Tso told Live Science.

In the study, detailed today (May 29) in the journal Scientific Reports, researchers investigated whether orb-web spiders (C. ginnaga) hid from predators by resembling bird splats.

To test whether the fecal disguise was effective, the scientists measured the color contrast between the spider's body, its web and actual bird droppings, all against a background in nature. The results showed that the spider bodies were indistinguishable from their webs and from the bird droppings, as viewed by wasps, the researchers said.

Then, the researchers blackened either the spiders' bodies and web decorations, just the disclike web decorations or just their bodies, and observed how often wasps attacked the arachnids. The wasps were more likely to attack a spider when only its decoration was blackened, suggesting that the spiders were, indeed, using their body and decoration as a disguise.

(That's not the strangest thing orb spiders do. The species N. malabarensis  sports a detachable penis that continues transferring sperm even after it breaks off from its owner.)

And orb-web spiders aren't the only eight-legged masqueraders. "Some bolas spiders and crab spiders have been observed to place silks around them when perching on leaves, and researchers suggest that they may represent cases of bird-dropping masquerading," Tso said. However, "more research is needed to verify how common it is," Tso added.

Editor's note: If you have an amazing spider or insect photo you'd like to share for a possible story or image gallery, please contact managing editor Jeanna Bryner at LSphotos@livescience.com.