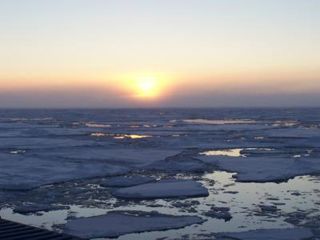 At the ice border in the Artic Ocean.
(Image: © Ursula Schauer, Alfred-Wegener-Institut.)

Diana Wall is a university distinguished professor and director of the School of Global Environmental Sustainability at Colorado State University. She contributed this article to Live Science's Expert Voices: Op-Ed & Insights.

Most people think of Antarctica, as an ice-covered continent at the bottom of the earth, a lifeless place — except, perhaps, for the charismatic penguins. However, Antarctica also has ice-free, Mars-like landscapes that are seemingly lifeless but hide remarkable and unique organisms in the soil. The recent news that the collapse of the West Antarctic Ice Sheet is unstoppable has spurred a great deal of commentary on sea level rise and how it might affect people living on the coastlines of North America. Not surprisingly, there is little news about the native creatures that live on the world's coldest continent. [The Gorgeous, Dangerous World Below Antarctic Ice (Op-Ed)]

I have made many trips to the Dry Valleys of Antarctica to study such tiny soil invertebrates: nematode roundworms that are among the most abundant animals in that extreme ecosystem. My colleagues and I have gained respect for their ability to survive the cold dark winters, and particularly for Scottnema, a species living in saline soils. In 2005 I even had a new namesake, to research and explore: Wall Valley near the Ross Ice Shelf and McMurdo Station.

This work is really just beginning. In fact, until the 1980s most scientists still believed that Antarctic soils were completely empty and dead, and much of Antarctic soil still remains completely unexplored and unstudied.

Many Antarctic scientists like myself have been concerned about climatic changes in Antarctica  for years. For example, a 2013 study showed that the Ross Ice Shelf experienced sudden collapses in the distant past, and that this could happen again with warming. The ice shelf acts as a buttress that holds back the flow of the ice sheet, and without the shelf, ice loss will accelerate and sea level will rise.

Now two new studies add to the evidence that the ice sheet is unstable. The studies conclude that the Antarctic has already crossed a tipping point, and it's now too late to stop the ice sheet's collapse. The full collapse and the projected sea level rise will take more than 200 years, but at the end of this time, the ecosystems like Wall Valley will likely be very different. Warmer temperatures and freedom of ice means that invasive species may move in, and the uniquely adapted native organisms will struggle to survive. It's difficult to predict how they would fare.

I think that the changes to this cold ecosystem would be a tremendous loss for all of us. Antarctica gives us an opportunity to study soil communities in one of the most pristine, low-diversity environments on earth, and uncover important principles about the drivers of biodiversity itself. We can also learn about the role of soil organisms in the functioning of a healthy ecosystem, which has implications for nutrient cycling and resource management for lands around the world.

While the collapse may seem to be unstoppable and not in our lifetimes, my colleagues and I are seeing changes to the organisms and these landscapes now. Reducing emissions would buy us time to gain as much valuable knowledge as we can.

The Antarctic collapse  should also serve as a reminder that there are other climate consequences hiding in our soil. The frozen soil at the top of the planet, in Arctic regions, contains buried greenhouse gases, including methane, which are released as the ground thaws. Also buried are the remains of dead plants and animals that rot as temperatures warm, producing additional greenhouse gases.

Those gases are even more powerful warming agents than carbon dioxide. The melting process has already begun, and methane release rates have increased. One study found the gases increased 31 percent in just five years, from 2003 to 2007. As more gases are released, the melt would speed up, making many scientists think that eventually the system would pass an irreversible tipping point similar to the one for ice in Antarctica.

Right now, we don't know how exactly much more warming it would take to cause this cycle in the Arctic to "tip" and become unstoppable. That's the thing about tipping points: they're hard to see until we've passed them, and then it's too late. If we don't start paying closer attention to the risks of climate change, we may see tipping points passed and ecosystems collapse, not just in Wall Valley but around the world. We may also see the emergence of new, differently functioning ecosystems that we don't fully understand.

That research reinforces the message that no place is immune from climate change. Our soils, water and ecosystems are all affected, and the impacts will cascade to reach us no matter how far they originate from where we live. Reductions in greenhouse gas pollution may be the only way to stop ourselves from passing more tipping points like this one.

Follow all of the Expert Voices issues and debates — and become part of the discussion — on Facebook, Twitter and Google +. The views expressed are those of the author and do not necessarily reflect the views of the publisher.  This version of the article was originally published on Live Science.