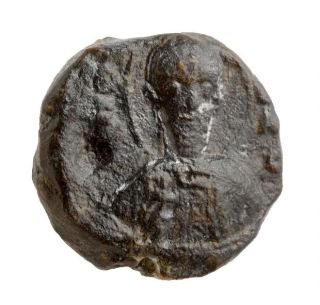 A rare Crusade-era lead seal used to secure a letter was uncovered in an ancient farmstead in Jerusalem, the Israel Antiquities Authority announced today (May 27).

The 800-year-old seal was likely once fixed to a document delivered to the farm from a sprawling cliffside monastery in the Judean Desert that was founded by Saint Sabas ("Mar Saba" in Aramaic) and once housed hundreds of monks.

"This is an extraordinarily rare find, because no such seal has ever been discovered to date," Benyamin Storchan and Benyamin Dolinka, excavation directors from the Israel Antiquities Authority, said in a statement. [The Holy Land: 7 Amazing Archaeological Finds]

This type of ancient seal was also known as a bulla in Latin. It consisted of two blank lead disks that would have been hammered together with a string between them. Opening the letter would cause obvious damage to the bulla, which was intended to discourage unauthorized people from breaking the seal.

One side of the seal bears the image of the bearded Byzantine-era Saint Sabas, who is wearing a himation (essentially a Greek version of a toga), brandishing a cross in his right hand and perhaps holding a copy of the gospel in his left hand. The other side of the seal is etched with a Greek inscription, translated as: "This is the seal of the Laura of the Holy Sabas." (The monastery was also called the "Great Laura" of Mar Saba. A laura, or lavra, is a type of Orthodox Christian monastery that has a cluster of caves for hermit monks.)

"The Mar Saba monastery apparently played an important role in the affairs of the Kingdom of Jerusalem during the Crusader period, maintaining a close relationship with the ruling royal family," Robert Kool, a researcher with the Israel Antiquities Authority who examined the seal, said in a statement. "The monastery had numerous properties, and this farm may have been part of the monastery's assets during the Crusader period."

A document in the archives of the Church of the Holy Sepulcher in Jerusalem refers to a farming settlement known as Thora that was sold to the Mar Saba monastery in 1163–1164. The location of that farm was lost to history, but the Mar Saba seal could link the recently excavated farm to Thora, explained Storchan and Dolinka in a statement.