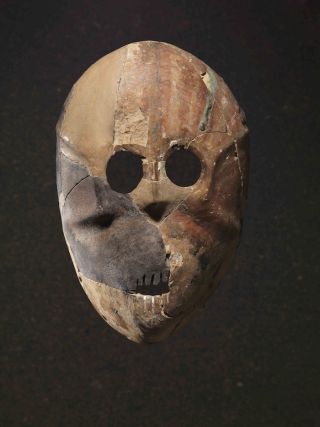 Researchers think these masks could have been worn comfortably on the face during ancient rituals. This mask comes from the site of Horvat Duma in the Judean Hills.
(Image: © Elie Posner | Israel Museum)

Billed as "the oldest masks in the world," a creepy collection of 9,000-year-old stone faces is now on display in Israel.

With stilted smiles and large eyeholes, the artifacts are thought to have represented the spirits of dead ancestors and may have been worn during Stone Age ceremonies and rituals, researchers say.

Before putting the rare artifacts inside glass cases at the Israel Museum in Jerusalem, the curators say they brought the masks together for a comparative study. Three-dimensional modeling showed that most of the masks could have been placed comfortably on the face, curator Debby Hershman said. [See Pictures of the Stone Age Masks]

"The eye holes allow for a wide field of vision, and the comfortable apportioning of the mass is suited to human facial contours," Hershman told Live Science in an email.

There are also holes on the edges of some of the ancient masks, which may have been used to attach them to the face. Alternatively, these perforations might have been threaded with hair to make the masks look more human or with cords to suspend the masks from pillars or other structures.

The masks come from various sites in the Judean Desert and the Judean hills, according to the museum. The artifacts date back to the Neolithic era, when humans started giving up nomadic lifestyles in favor of permanent settlements, complete with farms and domesticated animals.

Two of the stone masks were already in the museum's collection; one came from the Nahal Hemar cave in a cliff close to the Dead Sea and the second had been found at the nearby archaeological site of Horvat Duma.

The other artifacts are on loan from the private collection of Judy and Michael Steinhardt of New York. None of those objects have a known provenance, but based on analyses of the material, researchers think most of the masks came from the Judean hills or Judean foothills.

The exhibition, "Face to Face: The Oldest Masks in the World," will be on view through Sept. 13.