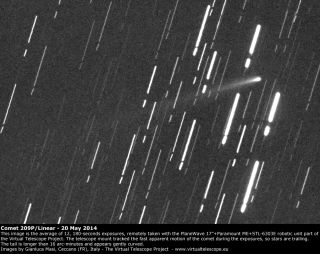 The Virtual Project imaged Comet 209P/LINEAR on May 20, 2014. The telescope mount tracked the apparent motion of the comet, so stars are trailing.
(Image: © Credit: Gianluca Masi/Virtual Telescope Project)

That's why some scientists will stay up late tonight into tomorrow morning (May 23-24) to glimpse the potential celestial fireworks that may be visible as Earth collides with the debris field of Comet 209P/LINEAR for the first time on record.

If some astronomers' predictions are right, hundreds of grain- and pebble-size interplanetary particles could pass through Earth's atmosphere, producing a never-before-seen meteor shower, dubbed the Camelopardalids. The celestial show is expected to peak between 2 a.m. and 4 a.m. EDT (0600 and 0800 GMT) tomorrow morning (May 24), over most of North America. [How to See the New Camelopardalid Meteor Shower]

"What's special about this potential shower is that we're going to be passing through a bunch of meteor trails this comet has laid down since the 18th century," said astronomer Carl Hergenrother, of the University of Arizona, who has been studying the comet for the past few months. "We've never actually gone though the meteor shower before. This year everything lines up so that we're actually going to go through the trails."

Comet 209/LINEAR was discovered in 2004. Since then, scientists have determined that the icy wanderer takes about five years to circle the sun. It will make a close flyby of Earth on May 29, coming within about 5 million miles (8 million kilometers) of the planet.

The comet is fairly large, stretching 1-3 miles (1.6-4.8 kilometers) across, but it is quite weak, meaning it doesn't release a lot of dust. If astronomers could get an up-close look at its surface, the comet's nucleus would be a dark reddish hue, Hergenrother said. (Or at least what astronomers would consider dark red; to a layperson, it would probably look dark gray.)

By reconstructing Comet 209/LINEAR's past orbit, scientists have a rough sense of where the icy body has been over the past century, Hergenrother said. Mapping a comet's path from more than 100 years ago is trickier, because the gravity of planets like Jupiter have bent its orbit. [Photos of Dark Places to Watch the Meteor Shower]

Hergenrother said there are several known meteor showers with no comets attached to them, raising the slightly unsettling prospect of comets lurking close to Earth without being detected.

By looking at how fast and how bright the Camelopardalid meteors are, astronomers can learn how active Comet 209/LINEAR was in the past.

Among the research groups studying the comet and its potential meteor shower is a team from the SETI Institute in California. A group of SETI scientists led by Peter Jenniskens will board a plane in Palo Alto, California, tonight and fly above 20,000 feet (6,100 meters) to observe the meteor shower without any interference from clouds and atmospheric dust. The SETI team also has a suite of autonomous meteor shower surveillance stations, known as Cameras for Allsky (CAMS), set up at the Lick Observatory, the Fremont Peak Observatory and in Sunnyvale, California.

Editor's Note: If you have an amazing meteor shower or Earth photo you'd like to share for a possible story or image gallery, please contact managing editor Jeanna Bryner at LSphotos@livescience.com.