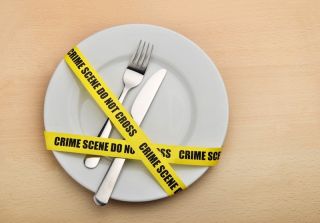 Using customer reviews of New York City restaurants on the online service Yelp, health investigators were able to identify outbreaks of foodborne illness that hadn't been reported to the health department.

The New York City Department of Health and Mental Hygiene worked with Columbia University and Yelp on a pilot project to explore the potential for using Yelp to identify unreported outbreaks, according to their report.

The researchers mined through about 294,000 restaurant reviews posted on Yelp over nine months during 2012 and 2013. To find the reviews likely of describing foodborne illness, the researchers looked for posts containing the keywords "sick," "vomit," "diarrhea" or "food poisoning."

The results showed that nearly 500 people had described an episode of symptoms consistent with foodborne illness. Only 3 percent of these incidents had been reported to New York City's nonemergency 311 services. [Top 7 Germs in Food that Make You Sick]

The researchers considered only incidents where two or more people who had eaten at the same restaurant reported feeling ill, and found about 130 of the reviews required further investigation. Telephone interviews with 27 reviewers who responded to the researchers' requests revealed three previously unreported restaurant-related outbreaks, according to the study, published today (May 22) in the Centers for Disease Control and Prevention's Morbidity and Mortality Weekly Report.

In the outbreaks reported at each of the three restaurants, three to seven people became sick after consuming a meal. The researchers found that the patrons likely had gotten sick after eating the house salad, shrimp and lobster cannelloni, and macaroni and cheese spring rolls.

The researchers investigated two of the three restaurants after the interviews and found multiple code violations, including serving unwashed vegetables and improper food storage conditions. In one of the restaurants, investigators found a mouse and live roaches.

The findings suggest that Yelp may be the latest among websites and social media platforms, such as Google Flu Trends and Twitter, that researchers and health authorities can use to track disease outbreaks. For foodborne illnesses, a restaurant-patron-review-based system like Yelp can identify outbreaks that are too small to be detected by larger surveillance systems, the researchers said.

For the 290 reviews that mentioned symptoms but didn't require further investigation, the researchers sent messages advising reviewers of the availability of 311 reporting. The majority of the 32 reviewers who responded to these messages said they were unaware of the 311 system.

The 311 service receives about 3,000 food poisoning complaints each year, 1 percent of which would later be identified as outbreak-related, the researchers said.

The New York City Department of Health and Mental Hygiene plans to continue this project and expand it to include additional review websites. Yelp will provide daily, rather than weekly, review feeds to researchers so that they can investigate potential foodborne illness outbreaks faster, the researchers said.