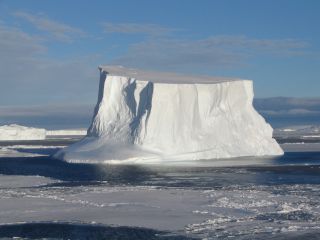 NASA is hosting a media teleconference today (May 12) to announce new findings from the ever-changing West Antarctic Ice Sheet, and you can watch the announcement live online.

Today's announcement is related to the stability of the ice sheet and its contribution to future sea-level rise, according to a statement from NASA. Scientists will present new research results at 12:30 p.m. EDT (5:30 p.m. GMT) and you can watch the webcast on Live Science. NASA has also invited the public to ask questions via Twitter using the agency's #AskNASA hashtag.

Researchers worry that the collapse of West Antarctica's glaciers would significantly speed up sea-level rise. The collapse refers to an unstoppable glacial retreat that would unload millions of tons of ice into the sea.

"For decades scientists have recognized that this area of the massive ice sheet covering Antarctica is particularly vulnerable to the effects of a changing climate," NASA officials said in a statement. "The majority of the ice sheet in West Antarctica is grounded on bedrock that lies below sea level, making it susceptible to melting from warm ocean waters."

The participants of today's teleconference include: