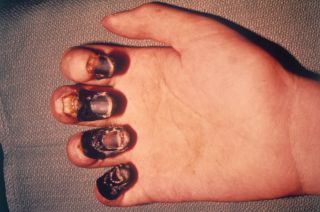 This 1977 image shows the necrotic flesh that gave the Black Death its name. This symptom is known as acral gangrene.
(Image: © CDC/ William Archibald)

The Black Death, a plague that first devastated Europe in the 1300s, had a silver lining. After the ravages of the disease, surviving Europeans lived longer, a new study finds.

An analysis of bones in London cemeteries from before and after the plague reveals that people had a lower risk of dying at any age after the first plague outbreak compared with before. In the centuries before the Black Death, about 10 percent of people lived past age 70, said study researcher Sharon DeWitte, a biological anthropologist at the University of South Carolina. In the centuries after, more than 20 percent of people lived past that age.

The Black Death, caused by the Yersinia pestis bacterium, first exploded in Europe between 1347 and 1351. The estimated number of deaths ranges from 75 million to 200 million, or between 30 percent and 50 percent of Europe's population. Sufferers developed hugely swollen lymph nodes, fevers and rashes, and vomited blood. The symptom that gave the disease its name was black spots on the skin where the flesh had died.

Scientists long believed that the Black Death killed indiscriminately. But DeWitte's previous research found the plague was like many sicknesses: It preferentially killed the very old and those already in poor health.

That discovery raised the question of whether the plague acted as a "force of selection, by targeting frail people," DeWitte said. If people's susceptibility to the plague was somehow genetic — perhaps they had weaker immune systems, or other health problems with a genetic basis — then those who survived might pass along stronger genes to their children, resulting in a hardier post-plague population.

In fact, research published in February in the journal Proceedings of the National Academy of Sciences suggested that the plague did write itself into human genomes: The descendants of plague-affected populations share certain changes in some immune genes.

To test the idea, DeWitte analyzed bones from London cemeteries housed at the Museum of London's Centre for Human Bioarchaeology. She studied 464 skeletons from three burial grounds dating to the 11th and 12th centuries, before the plague. Another 133 skeletons came from a cemetery used after the Black Death, from the 14th into the 16th century.

These cemeteries provided a mix of people from different socioeconomic classes and ages.

The longevity boost seen after the plague could have come as a result of the plague weeding out the weak and frail, DeWitte said, or it could have been because of another plague side effect. With as much as half of the population dead, survivors in the post-plague era had more resources available to them. Historical documentation records an improvement in diet, especially among the poor, DeWitte said.

"They were eating more meat and fish and better-quality bread, and in greater quantities," she said.

Or the effect could be a combination of both natural selection and improved diet, DeWitte said. She's now starting a project to find out whether Europe's population was particularly unhealthy prior to the Black Death, and if health trends may have given the pestilence a foothold.

The Black Death was an emerging disease in the 14th century, DeWitte said, not unlike HIV or Ebola today. Understanding how human populations responded gives us more knowledge about how disease and humanity interact, she said. Y. pestis strains still cause bubonic plague today, though not at the pandemic levels seen in the Middle Ages.

"Diseases like the Black Death have the ability to powerfully shape human demography and human biology," DeWitte said.

The findings appear today (May 7) in the journal PLOS ONE.