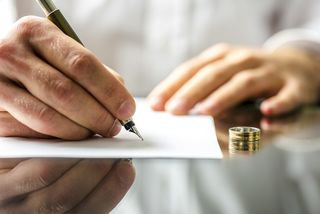 A couple may be more likely to divorce if the woman develops an illness, a new study says.
(Image: © Divorce papers photo via Shutterstock)

The risk of divorce rises for older married couples when the wife — but not the husband — becomes seriously ill, according to a new study.

Researchers examined how marriages are affected by the onset of four serious illnesses: cancer, heart disease, lung disease and stroke. Overall, they found that 31 percent of marriages ended in divorce during the period of the study. In 15 percent of cases, the wife in the couple had become sick.

The finding means that "if women become ill, they are more likely to get divorced," said study researcher Amelia Karraker, of the University of Michigan Institute for Social Research. The incidence of new chronic illnesses increased over time as well, with more husbands than wives developing serious health problems.

The researchers analyzed 20 years of data on 2,717 marriages. At the time that researchers first interviewed the couples in the study, at least one partner in each couple was over 50.

The health consequences of divorce are well-known, but few studies have examined the effect of health on the risk of divorce, especially among baby boomers, Karraker said. [I Don't: 5 Myths About Marriage]

"What sets this study apart from similar studies is that it examines risk factors in the 50 and older population," she told Live Science, adding that the divorce rate among this demographic has increased over the past two decades.

The researchers did not have information on who initiated the divorces, but prior studies indicate that it's typically the wife who does so, Karraker said.

The study also did not assess why divorce is more likely when wives, but not husbands, become seriously ill. But Karraker said, "When women fall ill, it could be that their husbands are not adequately fulfilling the role of caregiver. As a result, they are more likely to rely on friends and family members to care for them."

She added that in this age group, women outnumber men and therefore, divorced men have more choices than divorced women when it comes to prospective partners.

Karraker will present her findings today (May 1) at the annual meeting of the Population Association of America.

In light of the fact that health care costs for the aging population are increasing, Karraker suggested that policymakers should be made aware of the relationship between disease and risk of divorce.

"If a divorced woman suffers from a serious illness, it is likely she will have to rely on an outside caregiver, which can be very expensive and may not be entirely covered by Medicare or other insurance," she said.