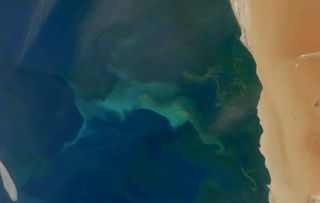 A new satellite photograph of the coast of Namibia shows the ocean in full color — "dyed" green and yellow by microscopic organisms.

The green swirls are masses of phytoplankton, single-celled plantlike organisms that convert sunlight to energy. The growth of phytoplankton is encouraged by the winds and currents along the southwest coast of Africa, according to NASA's Earth Observatory. Winds from the East push surface waters toward the open ocean; as a result, deep ocean water rises, a process called upwelling. This cold, nutrient-rich water feeds a thriving ecosystem, the bottom rung of which is phytoplankton.

Upwelling occurs in many places in the open ocean and along coasts, according to the National Oceanic and Atmospheric Administration (NOAA). Another notable upwelling spot is off the California coast.

Close to the shore in this image, yellow tendrils may be sulfur from bottom-dwelling bacteria, according to the Earth Observatory. Bacteria in the oxygen-poor deep release this sulfur, according to a 2009 study in the journal Progress in Oceanography. Unfortunately for any fish caught in the way of these releases, hydrogen sulfide is very poisonous. It's known as "swamp gas" or "sewer gas" and smells like rotten eggs. The toxin affects the respiratory and nervous systems, and high exposure can lead to rapid respiratory arrest and death.

That means natural hydrogen sulfide releases like those off the coast of Namibia may be fatal to larval or juvenile fish, researchers wrote in the 2009 Progress in Oceanography study.

"The area of the shelf prone to anoxic [no-oxygen] and sulphidic conditions is the nursery ground favoured by commercially important stocks such as pilchard (Sardinops sagax), horse mackerel (Trachurus trachurus capensis), and Cape hake (Merluccius capensis)," the researchers wrote.

If little bacteria can cause such big havoc, perhaps its no surprise that their byproducts are also visible from space. The new image comes from the Moderate Resolution Imaging Spectrometer (MODIS) on NASA's Aqua satellite, which swooped over the Namibian coast on April 10.

The Namib desert, visible on the right of the image, is an amazing place in its own right. The desert is famous for its weirdly barren "fairy circles," patches that may be caused by termites.