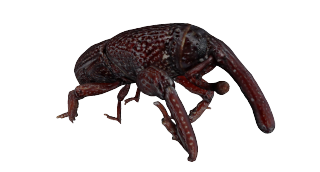 The system uses off-the-shelf equipment, including a camera and a computer, to obtain detailed, true-color 3D images of insects.

"To our knowledge, this is the first system that can capture 3D models of tiny objects," which can be as small as 0.11811 inches (3 millimeters) long in their natural colors, said study author David Lovell, of the Commonwealth Scientific and Industrial Research Organization (CSIRO) in Australia. [3-D Insect Models by New Scanning System Reveal True Color | Video]

"Existing 3D capture systems are designed for larger, less-detailed objects and don't handle reflective, transparent or iridescent surfaces well," Lovell told Live Science. There is another scanning system called micro computed tomography (Micro CT) that can capture both the internal and external structure of tiny objects in exquisite resolution, as an X-ray imaging method, but it can't capture color, he said.

For the insect images obtained through the new system, the file sizes are relatively small, about 10 megabytes each. This means users such as insect researchers can embed the models into Web pages and documents, and view them on their mobile devices.

The system itself is simple, and it uses a camera and flash, a rotating mounting stage, a rail along which the camera can slide to get shots at different points of the insect's body, a computer and reconstruction software, Lovell said. To obtain 3D insect models, the researchers took many 2D pictures of each insect, from different perspectives.

The 3D system can be used by institutions that store physical specimens of insect species, to make them available more broadly, the researchers said.

"One of the primary motivations behind this research is to help unlock knowledge about rare, often unique, specimens held in biological collections," Lovell said, adding that the actual specimens are often vulnerable to damage and have to be carefully protected.

"Digital color 3D models of sufficient detail will enable collections managers to liberate these precious specimens for much wider use and analysis," he said.

The 3D models could also allow scientists and educators to communicate more effectively about insect species, which, typically, are described only through words, and regular 2D photos or drawings.

Another potential application is in biosecurity. "Quarantine officers could carry a gallery of 3D insect models with them on an iPad to help discriminate between invasive and native species," Lovell said.