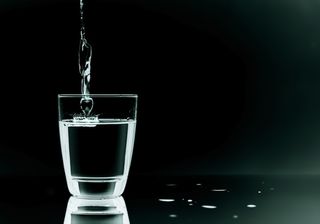 Even low levels of arsenic in drinking water may cause health problems, a new study suggests.
(Image: © Water glass photo via Shutterstock)

Lynn Wilson is academic department chair for public administration at Kaplan University, a science journalist and an academic author. She is also the founder and CEO of the SeaTrust Institute, a delegate and organizational NGO Focal Point for the UNFCCC and other United Nations regimes, a reviewer for IPCC AR5 and the U.S. National Institutes of Health, and an active researcher with projects in Africa and the Pacific Island states. She contributed this article to Live Science's Expert Voices: Op-Ed & Insights.

Water scarcity was, until recently, considered by most of the developed world to be like James Hilton's "Lost Horizon": "Far away, at the very limit of distance."

However, the convergence of aquifer depletion from increasing agricultural, industrial and municipal water use with more frequent and intense extreme-weather events creates an urgency to develop new, reliable sources of fresh water. Communities are attempting to "drought-proof" themselves through a combination of desalinization technologies, water recovery and reuse programs, and public private partnerships (PPPs). The race is on to provide fresh water to satisfy ever-increasing human demands. [What 11 Billion People Mean for Water Scarcity]

In 2012, there were about 16,000 desalinization plants in the world. Reverse-osmosis (RO) — a process through which salt water is forced under high pressure through a semi-permeable membrane to remove salt, harmful bacteria and microorganisms — represents more than 60 percent of the plants. Thermal technologies, which use energy to evaporate and then recondense saltwater, accounted for about 27 percent. When operational, California's Carlsbad Desalination Project (the largest desalination project in the Americas) will have a 54-million-gallon (204 million liters) capacity at a cost of $922 million to $1 billion, according to the World Economic Forum's 2014 report from the meetings in Davos, Switzerland. Heralded as a direct solution to potable water access by vulnerable populations, the Carlsbad project and similar projects face significant challenges, including high energy usage, hypersaline brine waste disposal, costs of facilities' production and maintenance, water transport to the most vulnerable people and marine ecosystem alteration.

The energy required to power the plants is derived primarily from fossil fuels, adding to the planet's energy burden and increasing carbon-dioxide-equivalent emissions. While the World Economic Forum reported in 2013 that emerging technologies offer the potential for reducing energy consumption by 50 percent or more, those technologies are not currently available. Construction and maintenance costs grow with required pipeline and infrastructure improvement. The Carlsbad project has addressed costs with a unique PPP that divides the responsibilities for ownership, financing and operational arrangements between the private company that owns the operation; the San Diego County Water Authority, which is responsible for infrastructure modifications to link to existing water systems; and the state financing authority agency for both public and private bonds.

Can other national and global communities emulate the Carlsbad model?

In the absence of creative financing mechanisms, economically distressed communities and developing countries will be unable tomaintain desalination projects after initial development funding is exhausted. Additionally, there areconcerns about transporting water to vulnerable populations in areas with aging or nonexistent infrastructures.

Desalination also presents environmental hazards, ranging from the disposal of hypersaline brine in the ocean (a solution that containsnot only salt, but also chemicals used to clean RO membranes and maintain systems) to thermal pollution and the alternation of ecological systems due to intake pipes that disturb the biological balance of delicate nearshore ecosystems.

Scientific studies from as far back as the 2007 University of Sydney Technology Group's "Desalination Effects: Potential Impacts of Brine Discharge on Marine Life" show that salinity change alone affects the development and propagation of species, their breeding and reproductive traits, larval survival, their life expectancy and their population density. Moreover, increased salinity decreases dissolved oxygen, which increases the occurrences of depleted oxygen in coastal and ocean areas. This process is known as hypoxia — "Thresholds of Hypoxia for Marine Biodiversity" from the Proceedings of the National Academy of Sciences of the United States (PNAS) shows a comparative analysis of hypoxia thresholds among different marine species.

The aforementioned cleaning chemicals inhibit biological growth (e.g., sodium hypochlorite) and adjust seawater pH (e.g. sulfuric acid and hydrochloric acid), while anti-scaling agents like polyphosphates, maleic acid polymers, and anti-foaming agents like alkylated polyglycols and fatty acids are discharged with the hypersaline brine, affecting various marine species near the waste-streamoutlet. These waste products constitute a concentration of toxics that are considered dangerous to aquatic life. Studies from the early 2000s such as Sabine Lattemann and Thomas Höpner's "Seawater Desalination: Impacts of Brine and Chemical Discharge on the Marine Environment" outline some of the human and environmental impacts from these discharges.

The systems and technologies required to mitigate desalination hazards require continued research: Implementation of wise technological, ecological and financial practices must be politically feasible within different global contexts. A recent Australian study from the Australian Academy of Technological Sciences and Engineering(ATSE) concluded that recycling and reusing water may be the most cost-effective and environmentally responsible solution.

Questions that need to be addressed are both local and global, require input and analysis from both experts and the public, require interchange with all disciplines that affect water decisions, and must be revisited whennew knowledge is obtained. As traditional financing for basic research for the public good has diminished, public-private partnerships are beginning to supplant traditional sources of support for research to improve water decisions as well as water infrastructure.

Holistic policies need to employ multi-criteria decision analysis under a wide variety of scenarios that engage stakeholders at different scales, from local to international. New thinking must explicitly consider consequences for different water users in changing climatic conditions over time. And, local strategies must engage new financing that links to risk-management strategies that incorporate the local economic, social and environmental costs of water decisions so that the choices of combined approaches are appropriate for local communities and conditions.