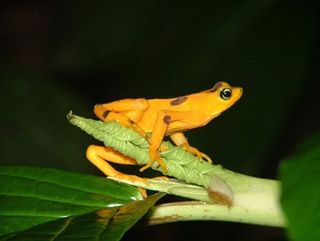 The Panamanian golden frog is one of more than 100 species of disappearing harlequin frogs.
(Image: © NatureServe)

Caribbean and Central American frogs have their ancestors to thank for their relaxing and picturesque habitats, according to a new study. DNA evidence suggests that at least 29 million years ago, South American frogs hopped on some sort of natural rafts and drifted until reaching either Central America or the Caribbean islands, where they gave rise to new frog populations. Very little has been understood about the evolutionary history of tiny frogs nicknamed “Eleuths” (named after their genus, Eleutherodactylines), which can be as tiny as two centimeters long and make up almost a third of all frogs living in South America, Central America and the Caribbean. Some scientists had predicted that these frogs originated in South America and then crossed into Central America and the Caribbean via land bridges that had existed prior to breaking away about 80 million years ago. In order to test this theory and learn more about how these frogs were evolutionarily related to each other, S. Blair Hedges, an evolutionary biologist at Pennsylvania State University, and his colleagues gathered data on 277 different species of Eleuths from these regions and compared their DNA sequences. An analysis of the sequences shows that, contrary to expectations, these South American frogs didn’t walk their way to their new homes. Instead, they made the trip to Central America or the Caribbean between 29 and 47 million years ago, after the land bridges broke—which means they had to travel by floating across water on a raft such as a piece of wood from a tree. The researchers' findings are detailed in this week's issue of the journal Proceedings of the National Academy of Sciences. The frog species that have since evolved in the Caribbean and Central America are very distinct from their South American ancestors, suggesting that, for whatever reason, South American frogs did not continue to travel north and join their equatorial relatives after the mass exodus millions of years ago.