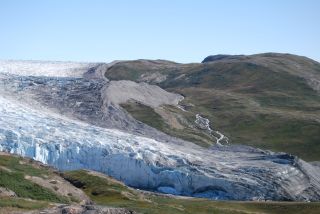 Buried thousands of feet under Summit, the highest point on Greenland's ice sheet, is a soil born before humans ever walked on Earth. The 2.7-million-year-old silt is a remnant of the verdant tundra that covered Greenland before it was entombed in ice, researchers report today (April 17) in the journal Science.

Pollen and plant DNA buried in the seafloor offshore of Greenland also suggest the island once had tundra and patchy forest, similar to today's high Arctic. The new findings hint that at Summit, the tundra landscape was open to the sky for 200,000 years to 1 million years before ice covered it. [In Photos: See Greenland's Ancient Landscape]

"There was a really stable landscape on Greenland before the ice sheet came," said lead study author Paul Bierman, a geomorphologist at the University of Vermont. "This landscape has been preserved from beyond the dawn of humankind."

The new results also mean the Greenland Ice Sheet gets a nod for endurance. If the soil under Summit has been buried for 2.7 million years, then the discovery implies the ice sheet has never fully melted, even when the Earth went through an incredible natural warming swing 130,000 years ago — one as warm as this century's predicted climate change.

"Now we know that it's unlikely the ice sheet has disappeared for significant periods of time in the last 3 million years, at least at this one pinprick on this big island," Bierman told Live Science. "Now human activity may spell the end of it."

The ancient soil was pulled from beneath the Greenland Ice Sheet in 1993, during the GISP2 deep-drilling project to reach the bedrock beneath Summit. The 10,019-foot-long (3,052 meters) GISP2 ice core records more than 100,000 years of past climate history, but until now, no one had examined the dirt in the ice at the bottom of the drill hole. (The ice is archived at the National Ice Core Laboratory in Denver, Colo.)

"I was asking a really different question than people who look at ice cores," Bierman said. "I was looking for a history of landscapes in ancient Greenland, and that mindset wasn't there 20 years ago. It's the evolution of science — you're always coming up with new hypotheses to test," he said.

Bierman and his co-authors teased out the sediment locked in the frozen ice, and deciphered its history with a well-established geochemical technique called beryllium-10 dating.

Bierman said he was stunned by the sky-high levels of beryllium-10 in the soil from the GISP2 ice core.

"Our eyes just lit up. It was completely unexpected and one of the few times I've been totally surprised in my career," Bierman said.

The frozen soil contains millions of beryllium-10 atoms, at a level comparable to other long-lived Arctic landscapes, such as tundra soil in Alaska, the researchers said. Only the interiors of Africa and Australia contain older landscapes, having escaped the erosive power of the Earth's recent ice ages. Soils in these hot continental interiors are many millions of years old.

Of course, that begs the question of why Greenland's glaciers didn't grind away the ancient soil. The answer: Mounting evidence suggests many ice sheets are frozen to their beds. The ice does flow, but it deforms like glass or warm plastic above a base that is stuck to the ground. In the GISP2 ice core, the bottom 30 to 50 feet (10 to 15 m) is frozen to bedrock, and the ice above is a whirl of folded, deformed layers, Bierman said. These deforming ice sheets are called cold-based glaciers, while those that erode their rocky bottoms with water and ice are known as warm-based glaciers. [The Power of Ice: Photos of Glacier Erosion]

Previous work by Bierman's students found that some Greenland glaciers protect the land like armor, preserving landscapes that were 800,000 years old.

Bierman and his colleagues are now searching for ancient landscapes in Antarctica, though the researchers must reach back further in time because the continent froze earlier than Greenland.

"The bottom of an ice sheet can preserve some really old landscapes," Bierman said.