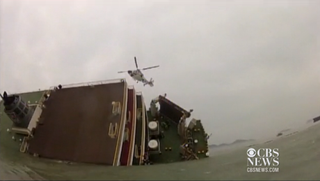 The sinking South Korean ferry had hundreds of high school students onboard for a school trip.
(Image: © Screenshot, CBS News)

Of the 475 passengers onboard, nine have been confirmed dead so far, a South Korean coast guard official said, but that number is expected to rise sharply, because any remaining survivors have been exposed to chilly water for more than a day, according to CBS News.

The 480-foot ferry (146 meters), the Sewol, was on its way from Incheon, in northwestern South Korea, to the island of Jeju, a 14-hour overnight trip, when it started listing to one side and filling with water Tuesday morning. The ship sent a distress call when it was three hours from Jeju, the Ministry of Security and Public Administration said, according to CBS News. [Disasters at Sea: 6 Deadliest Shipwrecks]

Many of the passengers were high school students on a class trip. Several students have sent text messages to their loved ones, fearing they will not survive, several news outlets reported.

What caused the ferry to sink is still unknown, but many survivors said they heard a loud banging as the ship started tilting sharply, according to CNN affiliate YTN. A voice on the ship's loudspeakers ordered passengers not to move.

Authorities are investigating reports that the ship may have been off course at the time of the incident, and that few of its lifeboats made it out, CNN reported. The ferry captain, Lee Joon Sok, was among those who made it out.

"I am sorry; I am at a loss for words," Lee said at a South Korean Coast Guard office, according to CNN.

Boats, divers and helicopters are still searching the area where the ship sank. More than 170 ships and 512 divers have surrounded the sinking vessel, but bad weather is hindering the search for survivors. Rescuers have considered trying to pump air into the ship to keep survivors alive, but the weather has prevented these efforts.

The water in the area is about 54 degrees Fahrenheit (12 degrees Celsius), cold enough to cause hypothermia within 1.5 hours, an emergency official said, according to CBS News.