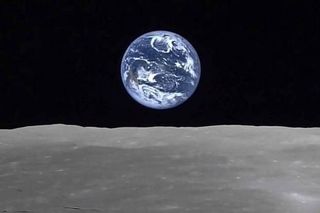 Geocentrism, a long-debunked idea, holds that the Earth is the center of the universe.
(Image: © JAXA, CC BY-NC-ND.)

Four prominent cosmologists say they were misquoted in a documentary trailer promoting a claim debunked more than 450 years ago: that the Earth is in a privileged spot in the universe.

Producers of the independent film "The Principle" state that "science could be wrong" about the Copernican principle, or calculations by 16th-century astronomer Nicolaus Copernicus showing that Earth orbits around the sun and not the other way around. An Earth-centered solar system or universe is also defined as a geocentric system.

Co-producer Robert Sungenis did not respond to multiple interview requests from Live Science. His  trailer received universal ridicule among scientists interviewed for this story, including Lawrence Krauss, who was portrayed in the preview. [Religion and Science: 6 Visions of Earth's Core]

"I'd be more upset, except the idea is so stupid that in the end, it will just reflect badly on them," said Krauss, a theoretical physicist at Arizona State University. Krauss has authored more than 300 scientific publications and several mainstream books.

"People are afraid that science will threaten their faith, and there are two approaches: One is to deny the results — the science — and the other is to misuse science," he told Live Science. "I think these people think if they can hoodwink scientists, they can show off a thing or two, and of course they won't show anything."

The science of Copernicus and Isaac Newton (who formulated three laws of motion) underpin modern astronomy and physics. Their principles cover matters such as how spacecraft get from one planet to another and foundational mechanics governing how skyscrapers are built.

As for how the scientists appeared in "The Principle" in the first place, Michio Kaku — best known for his work on string theory – said it was a matter of "clever editing" of innocuous statements, which is hard to combat, since he likely signed a release form for his participation.

"It borders on intellectual dishonesty to get people to be a part of a debate they don't want to be a part of," said Kaku, a theoretical physicist at the City College of New York who was also quoted in the trailer.

George Ellis, a mathematics professor emeritus at the University of Cape Town in South Africa, said geocentrism never came up in his interview.

"The interviewers never put that idea to me, and if they had done so, I would, of course, have said I do not agree," Ellis wrote in an email to Live Science. "There is no reason whatever to support such a view."

British physicist Julian Barbour — cited in a trailer description of the documentary on YouTube – said his involvement in the film seems to have arisen from a gross misunderstanding of a 1977 paper he di-authored with Italian physicist Bruno Bertotti.

The paper, Barbour told Live Science, created a model showing that Newton's First Law — that objects in motion will continue to move in a straight line unless an external force is applied — can be explained by distant stars or masses in the universe. The physicists used a simple modelin which the sun is at the center of the universe, but the model was not supposed to fully represent reality. It also, Barbour pointed out, is not a geocentric model as the Earth is still going around the sun.

"There's an awful lot of people on your side of the Atlantic that don’t believe in evolution," Barbour said. "I think it geocentrism] might be the same kind of phenomenon.," Barbour sai.

Astronomer Chris Impey of the University of Arizona, who was not quoted in the trailer,  – said geocentric views do not necessarily mean  a disbelief in evolution. Scientific conspiracy views, however, tend to cluster, he said.

More scientific literacy is needed to combat such uninformed views, especially to explain the subtle arguments against geocentrism, he said.

"Earth moving versus the sun was not a trivial issue to resolve, and in fact, it was not completely resolved in the time of Copernicus," Impey told Live Science. It wasn't until 1728 that James Bradley reported the aberration of starlight, a phenomenon where Earth's motion in space makes it look like the stars are changing positions.

Producers of the documentary include Robert Sungenis, whose writings include the book "Galileo Was Wrong: The Church Was Right" (CAI Publishing Inc., 2007), and Rick DeLano, who wrote a statement on "The Principle's" Facebook page.

DeLano said the documentary addresses information that "mainstream opinion makers" would not want publicized — for example, a 1922 statement by Albert Einstein saying the motion of the Earth "cannot be detected by any optical experiment."

DeLano did not mention the rest of Einstein's sentence, in which he added that the Earth is revolving around the sun,  – or that Einstein's theory of special relativity explains stellar aberration.