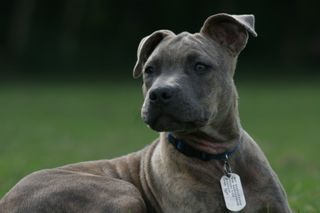 What is your dog really thinking?
(Image: © Vanessa Woods)

Marc Bekoff, emeritus professor at the University of Colorado, Boulder, is one of the world's pioneering cognitive ethologists, a Guggenheim Fellow, and co-founder with Jane Goodall of Ethologists for the Ethical Treatment of Animals. Bekoff's latest book is Why Dogs Hump and Bees Get Depressed (New World Library, 2013). This Op-Ed is adapted from one that appeared in Bekoff's column Animal Emotions in Psychology Today. He contributed this article to Live Science's Expert Voices: Op-Ed & Insights.

We've all seen the look on our dog's face that says, "Uh oh, I did something I shouldn’t have done and I don't think you’re gonna like it." We read it as guilt or shame.

Recently, a reader sent me an essay by Laura Moss of Mother Nature Network called "Do Dogs Really Feel Guilt?" Moss summarizes the excellent studies conducted by a renowned dog researcher, Barnard College's Alexandra Horowitz. Horowitz discovered that people are not very good at reading doggie guilt or shame — and that we often see those emotions when they're not there, when the dogs aren't feeling them or because they didn't do anything that would elicit these sorts of responses. Horowitz goes deeper into these concepts in her new edited book called Domestic Dog Cognition and Behavior.

In Moss's essay, she quotes from Pascale Lemire, creator of the website dogshaming, in which she says, "I don't think dogs actually feel shame ... I think they know how to placate us with this sad puppy-dog look that makes us think they're ashamed of what they've done," a quote taken from an earlier essay called "Behaviorists: Dogs feel no shame despite the look" published in USA Today. I've emphasized the word "think" because that is all these claims are — mere thoughts.

So, what do we really know? Existing data do not tell us that dogs are unable to feel guilt or shame.

To wit, Horowitz wrote the following comment. It's a response to an earlier essay of mine called "The Genius of Dogs and The Hidden Life of Wolves":

"Spot on, on 'guilt.' Thanks so much for alerting me to and correcting the ubiquitous error about my study, some years back, which found that dogs showed more 'guilty look' when a person scolded or was about to scold them, not when the dog actually disobeyed the person's request not to eat a treat. Clearly what the results indicated was that the 'guilty look' did not most often arise when a dog was actually 'guilty.'

"My study was decidedly NOT about whether dogs 'feel guilt' or not. (Indeed, I'd love to know...but this behavior didn't turn out to indicate yay or nay.) I would feel dreadful if people then thought the case was closed on dogs (not) feeling guilt, which is definitely not the case. Many secondary sources got this right, but it must require reading the study to appreciate exactly what I did."

The biology of guilt

There are solid biological reasons to assume dogs experience guilt and shame. In an essay called "Can Dogs Experience Guilt, Pride, and Shame: Why Not?," I wrote that we don't know if dogs experience guilt, pride and shame, however "because it's been claimed that other mammals with whom dogs share the same neural bases for emotions do experience guilt, pride, and shame and other complex emotions … there's no reason why dogs cannot. And, there's solid biological/evolutionary reasons to assume dogs can — and do. Recall Charles Darwin's ideas about evolutionary continuity in which the differences among species are seen to be variations in degree rather than kind — 'If we have or experience something, "they" (other animals) do too.'"

If the dog in the front is so innocent, why is that puppy in the back hiding? Credit: Jingzhi Tan

It's extremely important to get things right, and it's essential to pay attention to what Horowitz and other researchers actually study and discover in their research. It's also important to pay attention to what's called "citizen science" about the emotional lives of dogs and other phenomena, absent convincing data from "scientific science" to the contrary. If we discover dogs do not feel guilt or shame, well and good.

But to claim we know this already closes the door on much needed, and very exciting, research.

Bekoff's most recent Op-Ed was "Two Healthy Lions, and Their Cubs, "Zoothanized" … Why?" This article was primarily adapted from the post "Do Dogs Really Feel Guilt or Shame? We Really Don't Know" in Psychology Today. Follow all of the Expert Voices issues and debates — and become part of the discussion — on Facebook, Twitter and Google+. The views expressed are those of the author and do not necessarily reflect the views of the publisher.This version of the article was originally published on Live Science.