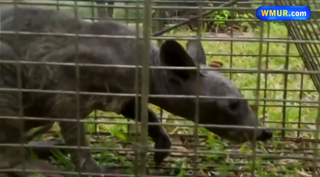 A man in Ratcliffe, Tex., claims he captured what could be the legendary chupacabra.
(Image: © WMUR | YouTube)

A Texas couple has captured what is being called a baby chupacabra, the legendary animal said to roam the countryside in search of blood. The "Ratcliffe chupacabra," as it's been dubbed, was found Sunday in a tree on the couple's property in Ratcliffe, Texas. But upon closer examination, it becomes clear that the mysterious creature couldn't possibly be the legendary beast.

The defining feature of the chupacabra is that it's a vampire: Chupacabra means "goat sucker" in Spanish, named so because it is said to drain the blood from animals such as goats, chickens and other livestock.

The news and video footage of the small, hairless, caged animal went viral and left countless people scratching their heads, wondering if a chupacabra (unlike Bigfoot or the Loch Ness Monster) has finally been caught. "In Dewitt County, [Texas], most people are convinced this is the elusive chupacabra," said a reporter with KAVU News, an ABC affiliate based in Victoria, Texas, though a wildlife biologist suggested it might be a dog or coyote. Still, others are not convinced. [Bigfoot to Chupacabra: Our 10 Favorite Monsters]

So, is this animal the elusive chupacabra? It's clear that it's not, because video of the creature broadcast on KAVU clearly shows the Ratcliffe chupacabra doesn't have the anatomical mouth features that would allow it to suck blood, from goats or anything else. Like several other "chupacabras" found in Texas and elsewhere in recent years, a simple look at the mouth demonstrates that it is physically impossible for the animals to suck blood. The mouth and jaw structures of raccoons, dogs and coyotes prevent them from creating a seal around their victims, and, therefore, physically prevents them from sucking the blood out of goats or anything else. This Ratcliffe chupacabra was not seen nor videotaped sucking blood from anything.

So, if the mysterious animal is not a chupacabra, then what is it?

The most likely answer is that it's a raccoon. Animals that have lost most or all of their hair can be very difficult to identify correctly, for the simple reason that people are not used to seeing the animals without hair. Wildlife experts often see wild animals suffering from various stages of sarcoptic mange — a skin disease that causes animals' hair to fall out — but most people do not. Healthy raccoons are instantly recognizable by their signature dark "bandit mask" coloring around their eyes. But when their facial hair falls out due to disease, it becomes much more difficult to identify the animal. [Rumor or Reality: The Creatures of Cryptozoology]

Then, you need to look at other features, including size, behavior and anatomy.

These features suggest that the Ratcliffe chupacabra is, indeed, a raccoon. And though most "chupacabras" found in Texas have been identified as canids (the zoological family that includes dogs, coyotes and foxes), this is not the first raccoon misidentified as a chupacabra. In an article in the March/April 2014 issue of "Skeptical Inquirer," another "chupacabra" found and photographed in the 1950s in Texas was identified by Darren Naish, a vertebrate paleontologist and science writer from the University of Southampton, as a mangy raccoon.

Another clue about the animal's origins can be found in where it was discovered: in a tree. This is a typical place to find a raccoon, but unlikely for a dog or coyote. Furthermore, in a video of the animal, the Ratcliffe chupacabra picks up food with its paws to eat. This behavior is also typical of raccoons. The mysterious critter is currently being fed a diet of corn and cat food, but if the creature truly is a chupacabra, that theory can be easily tested: Put it in a pen with a goat or chicken, and see if it attacks them and sucks out its blood.

The reason that the Ratcliffe chupacabra has been called a chupacabra is not that the mysterious animal's characteristics match those of the legendary vampire — because they don't — but instead because those who found it didn't know what else to call it, according to the book "Tracking the Chupacabra: The Vampire Beast in Fact, Fiction, and Folklore" (University of New Mexico Press, 2011).

The original chupacabra, whose image came from the 1995 science-fiction film "Species," was of a bipedal, spiky-backed monster with glowing red eyes. That chupacabra has faded into folklore and myth, but over the past decade, any strange animal whose identity is not immediately obvious is often dubbed a "chupacabra." The word has become a sort of catch-all term for weird animals, living or dead. It's not surprising that the chupacabra continues to be found, whether it exists or not.

Benjamin Radford is deputy editor of "Skeptical Inquirer" science magazine and author of seven books, including "Tracking the Chupacabra: The Vampire Beast in Fact, Fiction, and Folklore," and "Lake Monster Mysteries: Investigating the World's Most Elusive Creatures." His website is www.BenjaminRadford.com.