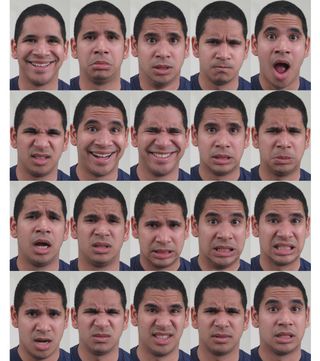 When you're feeling one of those combination emotions, like sadly angry or happily disgusted, it shows on your face in a unique way, a new study shows.

In fact, there may be at least three times more recognizable human facial expressions than previously thought, the researchers said.

In a new study, researchers defined 21 facial expressions that we use to convey our emotions, and found that a computer model could tell them apart with a high degree of accuracy by looking for small changes in facial muscles.

Among these facial expressions were the six, long-recognized basic emotions — happy, sad, fearful, angry, surprised and disgusted — but also 15 others, which were a combination of these basic feelings. For example, a person may show that they feel happily surprised, or angrily surprised, said the researchers, calling such feelings compound emotions. [Smile Secrets: 5 Things Your Grin Reveals About You]

This extended library of facial expressions of emotions may be useful in studying human brain and social communication, as well as in the design of computer systems that can communicate with humans, researchers said in their study published today (March 31) in the journal Proceedings of the National Academy of Sciences.

"We've gone beyond facial expressions for simple emotions like 'happy' or 'sad.' We found a strong consistency in how people move their facial muscles to express 21 categories of emotions," said study researcher Aleix Martinez, a cognitive scientist and associate professor of electrical and computer engineering at The Ohio State University. "That tells us that these 21 emotions are expressed in the same way by nearly everyone, at least in our culture."

Historically, scientists and philosophers have focused their studies on six basic emotions, but deciphering a person's brain functioning with only six categories is like painting a portrait with only primary colors, Martinez said in a statement.

In the study, the researchers took about 5,000 photographs of 230 college students who were asked to make faces in response to verbal cues such as, "You just got some great, unexpected news" (happily surprised) or "You smell a bad odor" (disgusted).

To determine which expressions were unique enough to be consistently distinguished from others, the researchers analyzed the photographs with a computer program called the Facial Action Coding System (FACS). Popularized by psychologists in the 1970s, FACS breaks a facial expression down into its elements, such as raised eyebrows or wrinkled nose, and analyzes the underlying muscle movements that are used to create that expression.

Although the collection of emotional expressions would be of most interest for basic research in cognition, researchers said that it may be also useful for understanding whether perception of compound emotions is altered in psychiatric disorders such as schizophrenia, or social impairments such as autism.