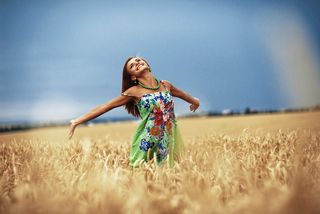 Is this kind of joy something to jump for? The answer may depend on who you ask.
(Image: © standret, Shutterstock)

Today (March 20) is the United Nations-sponsored International Day of Happiness. But for many people, joy is less a reason to celebrate and more a trigger of fear.

Aversion to happiness exists across cultures, especially those that value harmony and conformity over individualism, recent research suggests. The findings challenge the Western assumption that everyone is aiming for a life full of unremitting joy.

The researchers find that reasons for avoiding happiness are varied: Some people fear too much happiness will bring sorrow, while others consider happiness a shallow, vapid emotion.

Happiness is a hot topic for social scientists and policy makers alike. Following the lead of the small nation of Bhutan, whose governmenta tracks Gross National Happiness, some organizations and agencies are making citizen happiness a priority, similar to progress rankings such as Gross Domestic Product. Similarly, happiness rankings of countries are a dime a dozen. Starting in 2012, the United Nations got in on this game with a scientific ranking of happiness across nations. In 2012 and 2013, Denmark ranked happiest. The United States was the 17th-happiest country in 2013. [5 Wacky Ways to Measure Happiness]

These efforts gloss over cultural differences in happiness, Weijers told Live Science. Comparing happiness between cultures runs into the problem of how different people define the emotion. And major policy efforts might run up against trouble if citizens aren't on board.

"In the United States, such measures might be lambasted for being ineffective or against individual liberties," Weijers wrote in an email to Live Science. "But, in other cultures, such efforts would also be seen as inherently corrupting, because they aim to have the negative effect of making people joyous."

In contrast, less conformist cultures studied were less likely to shy away from happiness. New Zealanders were not very afraid of happiness, the researchers found, and Brazilians were even less so.

"United States and Canada were not included in the study, but given the individualistic culture in these nations, it seems likely that North Americans would not be very afraid of happiness," Weijers said. [7 Things That Will Make You Happy]

Why fear happiness? Some cultures think of happiness as a loss of control — fun, but destructive, like being drunk, Weijers said. Others believe extreme highs must be followed by extreme lows, as revealed by proverbs from many nations. In Iran, people say that "laughing loudly wakes up sadness." In China, a cheerful person might be warned, "Extreme happiness begets tragedy." In English-speaking nations, you might hear, "What goes up, must come down."

Islamic cultures value sadness over happiness, Weijers said, because sad people are seen as serious and connected to God. Artists might fear that soothing their emotional torment will destroy their creativity (and, indeed, creativity has been scientifically linked to mental illness). Activists might see happiness as complacency and seek to rouse anger, instead.

And sometimes, Weijers said, it's not the feeling of happiness, but the expression, that seems troubling. If two friends enter a contest and one wins, the victor might tamp down his or her joy to make the loser feel better.

The findings call into question the notion that happiness is the ultimate goal, a belief echoed in any number of articles and self-help publications about whether certain choices are likely to make you happy.

The research also highlights the alterable definition of "happiness." Cultures may not agree on what true happiness is. In a 2013 study, published in the journal Personality and Social Bulletin, scientists examined dictionary definitions of happiness across time and nations. The researchers also analyzed U.S. presidents' State of the Union addresses and scoured Google's Ngram viewer, which allows analysis of words in Google books over time, for mentions of happiness.

That study researchers found that most nations in the past defined happiness as a factor of good luck and fortunate circumstances. Modern American English, however, stresses happiness as an internal mood, something more innate to a person and his or her character than to the external world. Bolstering the evidence of this change, the researchers found that mentions of a "happy nation" have declined over time in English-language books, while the phrase "happy person" has been climbing steadily.

The switch from happiness as external to internal picked up in the United States around the 1920s, the researchers found. This was a time often considered the beginning of modernity. Several other nations have picked up the "happiness as internal" usage, too.

As with Weijers' and Joshanloo's work, this study has its own implications for ranking world happiness.

"Germans, Russians, Japanese, Norwegians and many others might be thinking about how lucky they have been lately when they answer [questions about happiness]," the researchers warned. "Whereas Americans, Spanish, Argentine, Ecuadorians, Indians and Kenyans are not."