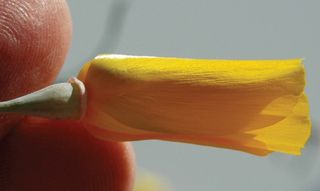 This is a close up of Eschscholzia papastillii.
(Image: © Shannon M. Still)

Two new species of bright-yellow poppies have been discovered in U.S. deserts.

"What is interesting about these new species is

that, while people have been collecting these plants for decades, they were not recognized as something different," study author Shannon Still, a postdoctoral researcher at the Chicago Botanic Garden, said in a statement. "They were always confused for existing species."

E. androuxii is quite rare, and found over only a small range, whereas E. papastillii is widely distributed.

There may be other desert plant species that are also understudied, Still said.

To determine that the plants were, indeed, new species, Still compared specimens he gathered from the field with preserved specimens in California plant collections.

"This work highlights the value that herbarium collections play in cataloging, understanding and conserving our biological diversity," he said in a statement.

The study was published March 11 in the journal PhytoKeys.