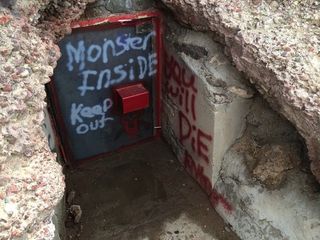 Nevada's Hidden Cave — an archaeological site with a 5,000-year history — was recently vandalized with spray paint and bullet holes, and officials are offering a $1,000 reward for information that helps them catch the perp (or perps).

Graffiti was found on rocks leading up to the ancient cave and the information kiosk was pierced with bullet holes, officials with the Bureau of Land Management said. There was even evidence of illegal digging at the site.

"This is the first instance of modern vandalism to the sensitive archaeological resources within Hidden Cave," Jason Wright, an archaeologist for the BLM's Stillwater field office said in a statement. "Damage to America's public heritage, culture, and history is a felony crime and most disrespectful."

Since archaeologists first explored the cave in the Carson Desert nearly a century ago, the site has yielded thousands of artifacts, including the ancient remains of food, tools and coprolites (a polite word for fossilized poop), offering historians insights about how Native American people lived and ate hundreds of years ago. Researchers with the American Museum of Natural History conducted excavations at Hidden Cave in the 1970s, and discovered that the cave — far too dark and dusty for permanent living — would have been used for storage and temporary housing.

Officials have been battling vandals in other protected areas around the country. Part of California's Joshua Tree National Park was closed last year so that rangers could address rampant vandalism at the site. (Officials blamed social media for fueling the urge to leave marks on the scenic environment — and document those misdeeds.)