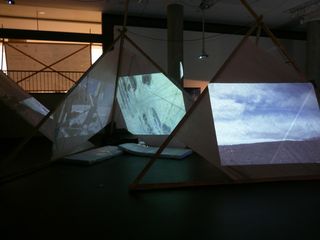 Whitney Dail Yoerger is a writer and cultural worker living in Maryland. She reports on activities and projects at the intersection of art, science and technology. This article was provided to Live Science in partnership with the National Endowment for the Arts for Live Science's Expert Voices: Op-Ed & Insights.

Andrea Polli, an award-winning digital media artist based in Albuquerque who teaches art and ecology at the University of New Mexico (UNM), calls attention to the way our climate is evolving by transforming scientific data into soundscapes, sonifications and participatory public artworks. For example, she has created installations that allow visitors to imagine being aurally immersed in Antarctica's sub-zero-temperature environment or observing what looks to be a hyperventilating, "suffocating" car. Her projects vary in form, often utilizing interactive websites, digital broadcasting, mobile applications and performances in order to reach as wide an audience as possible. "I wouldn't say that I'm really explaining anything as much as I'm promoting a kind of emotional reaction," she said.

In her work Particle Falls, Polli drew attention to particulate pollution, or the tiny, menacing particles in the air such as car exhaust, tobacco smoke, mold spores, pollen and silica dust. Using a nephelometer, which monitors air particulates, Particle Falls projects a cascading stream of current air quality data, enabling passersby to visualize the effect of their presence on the atmosphere in bright orange bursts. "If you can see that in real-time," Polli suggested, "you have a different kind of emotional reaction to it."

Last fall, the Chemical Heritage Foundation in Philadelphia projected Particle Falls onto the Wilma Theater as part of the foundation's Sensing Change exhibition. It was the second presentation of Particle Falls since its development for the 2010 ZERO1 Biennial in San Jose, Calif. "I like to think of these projects as living things that are evolving," Polli said. "I'll show them more than once, and with each iteration it may change."

Polli's earliest artistic interest within the world of science began with chaos theory, a mathematical field studying the underlying orders and unpredictable behaviors of dynamical systems. "There was an article that came out in Scientific American about fractals and chaos and it gauged programming code," she recalled. "I got curious about what that might sound like." So during completion of a master's degree in time arts (artworks that progress over time) at the School of the Art Institute of Chicago, Polli wrote a program to turn fractals into musical improvisations based on the Lorenz attractor, a set of chaotic solutions based on a mathematical formula first developed during studies of atmospheric convection.

It wasn't until several years later that Polli started exploring ecology. Attending an art-science conference in Los Angeles, she met her first scientist-collaborator, meteorologist Glenn Van Knowe of Troy, New York. "I told him about [my] work with the Lorenz attractor, and we talked about how that was the simplified model for air movement through the atmosphere and how much those models had progressed," she said. "That's when we started talking about doing the Atmospherics/Weather Works project."

Using the latest technology in atmospheric modeling, their partnership resulted in a multi-channel sonification of two historic storms that struck the Mid-Atlantic: the Presidents' Day Snowstorm (1979) and Hurricane Bob (1991). Atmospherics/Weather Works debuted in 2003 as a 16-speaker sound installation at a firehouse-turned-gallery in Lower Manhattan's Tribeca neighborhood. These cacophonous musical pieces interpreted "the more unpredictable complex rhythms and melodies of nature." With sound, Polli provided a soundtrack of storm activity that mapped the sudden weather changes that occurred over a 24-hour period.

In some ways, there is also a sensational quality to Polli's art. One such example is Breather, a bubble-encased car suffocating on its own exhaust fumes, that draws attention to Delhi's mounting health crisis due to air pollution. [How Can India Defeat its Debilitating Smog? (Op-Ed)]

Similarly, the mist-cloaked Cloud Car makes visible the effect that automobiles have on air quality. "[Breather] and the Cloud Car piece are very much a spectacle," she replied when asked how people have responded. "One thing I thought was effective about [both pieces] was that people would come up to the car and we would hand them a fact sheet that would say, 'If you have to drive, here are some things you can do that will reduce your emissions.'"

The point of these projects is ultimately to raise awareness and understanding of the issue at hand. "If we just tried to hand people that information without having some kind of fun spectacle to perk their interest, they might reject it or feel insulted by it or just not want to look at it or read it," said Polli.

She hopes that an emotional response will prove powerful enough to prompt changes in human behavior. "I think that art [and] digital media can help maintain people's interest by creating all kinds of different ways to raise awareness and raise people's energy and interest in doing things that are positive," she said. "I've talked to the meteorologists I've collaborated with, even as far back as 1999 to the 2000s, and they told me that they could not do their work without visualization. So it's become essential to the scientific work as well … I think [data visualization] is going to become really integrated in people's everyday lives."

The creative process for Polli's pieces is multifaceted, and often includes collaborative, interdisciplinary teams as well as extensive fieldwork. "I'm very interested in the people, specifically the scientific researchers and the site — what they're doing and what their knowledge is," she said. For Sonic Antarctica, Polli flew to the remote continent of Antarctica and spent seven weeks at a residency with the National Science Foundation's (NSF) Antarctic Artists and Writers Program. There she worked alongside scientists studying the global effects of climate change while conducting her own artistic inquiries. The result was a performance piece and a sound and visual installation based on her research.

When asked about her greatest environmental concern of the moment, she said, "Waste. I think it's a really huge issue." Polli added, "Right now, what I'm thinking about is how important it is to have a cycle of production that's circular rather than a linear cycle so that we can be more effective at reusing our resources." Polli will explore this issue over the next five years with the Social Media Workgroup, a lab that she directs at UNM's Center for Advanced Research Computing. The Social Media Workgroup is comprised of faculty, undergraduate and graduate students in engineering and the arts, and industry professionals who work together on "projects related to media technology, environment, and social change." [Vivid Visualizations: Prize-Winning Science Images ]

One of the group's projects, which received an NSF grant, explores new approaches to energy harvesting and raises awareness of global behaviors regarding energy consumption. "My research team is working on the outreach and raising public awareness about this kind of work," Polli said. The plan is to create a large LED grid for a high-rise in downtown Albuquerque that visualizes the city's energy consumption and energy potential.

With her dedication to this type of large-scale public work, Polli has managed to successfully break out of the studio and enter, well, the environment, making even the most stubborn people stop and think about our responsibilities as human beings on our shared planet.

This article is adapted from "The Artistic Climate" which appeared on the Art Works blog of the National Endowment for the Arts. The NEA is committed to encouraging work at the intersection of art, science and technology through its funding programs, research, and online as well as print publications.