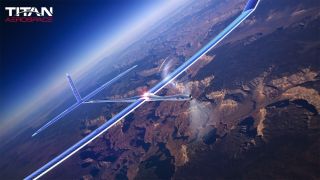 Facebook is in talks to buy a drone company that manufactures ultra-lightweight, solar-powered planes that are designed to fly high above commercial air traffic and can impressively remain aloft for up to five years, according to news reports.

The social media site's interest in Titan Aerospace, first reported by TechCrunch, could be part of the Internet.org initiative championed by Facebook chief executive Mark Zuckerberg, which aims to extend the reach of Internet connectivity across the entire planet.

The deal, reportedly worth $60 million, could be a boon for the ambitious Internet.org campaign. If the acquisition goes through, Titan Aerospace would first provide 11,000 drones to begin expanding Internet access in parts of Africa, according to TechCrunch.

Titan Aerospace's drones can reach an altitude of 65,000 feet (nearly 20 kilometers), and the vehicles have been nicknamed "atmospheric satellites" because they fly within Earth's stratosphere. The company's Solara 50 and Solara 60 models have previously been used to capture aerial photography, relay communications, track weather systems and monitor disaster recovery efforts, reported TechCrunch. [9 Totally Cool Uses for Drones]

The drones' 160-foot-long wings (49 meters) are covered in solar panels that store energy from the sun during the day. At night, the planes can run on power from onboard batteries. These technologies, designed to keep the vehicles lightweight and efficient, and enable the drones to fly without landing or refueling for up to five years, according to TechCrunch.

Facebook's acquisition of Titan Aerospace could open up new possibilities for the communications industry, said Michael Blades, a senior analyst at Frost & Sullivan Aerospace and Defense, a research and consulting firm based in Mountain View, Calif.

"If Facebook is able to provide substantial amounts of bandwidth via high altitude [drones], then it follows that other companies will use the same methods for other forms of digital communications: cellphones, television programming, etc.," Blades said in a statement. "If the atmospheric [drone] concept can be realized, the market for these platforms will grow rapidly while the commercial communications satellite market will be significantly impacted."