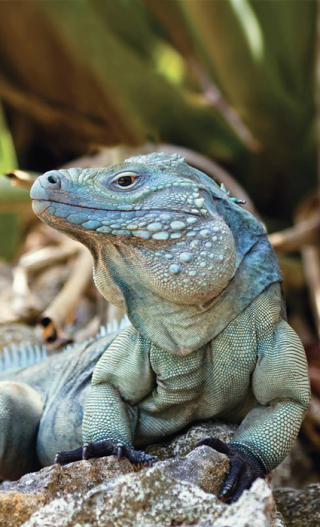 A male Grand Cayman Blue Iguana (Cyclura lewisi), one of more than 1,000 iguana species that have evolved through time.
(Image: © Fred Burton)

Iguanas have the oldest known sex chromosomes in the reptilian world, according to a new report.

Now, researchers based in the Czech Republic have conducted genetic studies that show iguanas do not follow this reptilian trend of high turnover rates for sex chromosomes. Instead, the majority of iguana species that have ever existed — estimated to be more than 1,000 species — have all shared the same sex chromosomes inherited from a common ancestor dating back to the Cretaceous Period, roughly 140 million years ago.

Since the Cretaceous, iguana species have evolved to live in wide-ranging regions of the world, from South America to Madagascar, and have adapted to habitats as varied as deserts and rainforests. Even so, these reptiles have maintained these same ancient chromosomes. [In Photos: The Wacky Animals of Madagascar]

"That's quite a nice conservation for such a long time," study co-author Lukas Kratochvil, a researcher at Charles University in Prague, told Live Science. "Dinosaurs went extinct, mammals started to be a successful group, and all iguanas still have the same sex chromosomes."

Kratochvil was surprised to find this long-term persistence of the chromosomes, since nothing on this timescale had ever been found in reptiles or other cold-blooded vertebrates.

"It is believed that reptiles have rapid turnover of sex chromosomes, and it was believed before our work that no such thing could be found in exothermic animals," Kratochvil said, referring to low turnover rates. Exothermic is another word for cold-blooded. "It really was a surprise to me."

A select few iguana species did show differences in their sex chromosomes, but more work is needed to understand this deviation from the trend, Kratochvil said.

This chromosome conservation may be more common amongst other reptiles, fish and amphibians than previously thought, Kratochvil said. Identifying variations in sex chromosomes requires detailed genetic work that has yet to be applied to a range of cold-blooded animal groups.

The team now plans to use similar techniques to examine the sex chromosomes of other reptiles, including geckos, snakes and other types of lizards. Through this research, the scientists hope to determine how common this phenomenon of sex chromosome conservation might be amongst other cold-blooded animals, Kratochvil said.

The study findings are detailed today (March 4) in the journal Biology Letters.