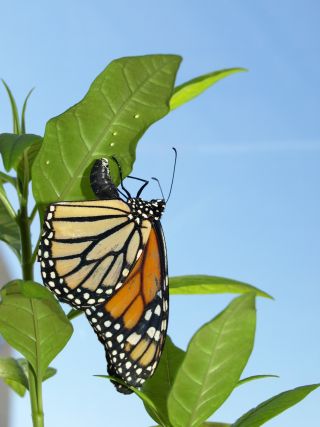 Last week, at a coffee farm in Costa Rica, I stumbled upon hundreds of butterflies, probably some kind of Heliconius species, all fluttering around a particular spot. At first it was hard to tell if they were coming or going. It's like that with butterflies. But as we stood and watched, they eventually settled on almost everything around. It looked like they had come to spend the night, but I did not stay to find out. It was quite beautiful.

For many butterfly species , finding a good place to stop and rest isn't easy. Deforestation, drought and shifts in global temperature are all altering butterfly habitat. Monarch butterflies in particular face a highly specific threat from humans: the weed-killer commonly known as RoundUp, or glyphosate. In the past decade, as the use of this potent chemical has skyrocketed, monarch populations have plummeted. This week, NRDC petitioned the U.S. Environmental Protection Agency (EPA) to urgently re-examine how and where glyphosate is used, and find ways to help protect monarch butterflies.

Over the past decade, RoundUp has become the most popular weed-killer in the country. Today's farms use it to grow Monsanto's genetically modified "RoundUp Ready" corn and soy, engineered to tolerate the herbicide, which the company also manufactures. Highway and utility crews use glyphosate to control plant growth along roadsides and along utility lines. If you use weed-killer to stop grass from sprouting in your driveway, it might contain glyphosate. Anyone can buy it at the store.

Glyphosate isn't a selective weed-killer — it harms a lot plants. One of the plants it's wiping out is milkweed, the sole source of food for monarch butterfly larvae. The only plant on which a monarch will lay its eggs.

From 1999 to 2010, roughly the decade after glyphosate use took off, milkweeds declined 60 percent in the Midwest, and monarch populations fell about 80 percent. Last winter, researchers counted an all-time low of 33.5 million monarchs at their Mexican wintering grounds. This is well below their 1997 high of 1 billion, and 10 percent of the running average over the past 15 years. [Is It the End for the Monarch's Cross-Continent Migration? (Op-Ed)]

Monarchs are in trouble. Scientists announced this year that the monarch migration — a near-miraculous event, spanning multiple generations over 3,000 miles in a single season — is in danger of disappearing. And there is broad agreement in the scientific community that glyphosate is a major part of the problem. Monarchs reproduce several times over the course of a migration. Without milkweed to sustain each new generation, the migration will fail.

Many of us are sensing the loss already. At a recent meeting, NRDC trustees from Minnesota, Vermont, New York and Texas told me they had seen almost no monarchs last year. And I know I've seen fewer, myself.

My wildlife expert colleagues at NRDC are recommending several steps that the EPA can take to protect monarchs. Limiting or banning the use of glyphosate and other harmful weed-killers along roadsides and utility lines, which tend to stretch along migration pathways and could provide important egg-laying habitat for monarchs, would be a relatively quick and easy first step. Milkweed is a pretty short plant and is unlikely to hinder maintenance work if it's allowed to flourish.

The EPA could also consider requiring safety zones, free of herbicides, in and around farms, to protect monarch-friendly habitat. The agency should also assess how the use of glyphosate for cosmetic purposes is affecting monarchs. There are other herbicides which are just as harmful, however, so the EPA needs to ensure that whatever replaces glyphosate isn't just substituting one harm for another.

I'm not sure what particular plant attracted the butterflies at the coffee farm, but there are a number of sweet-smelling plants around the area. Perhaps there was something they liked. Their visit made me more appreciative of the science that goes into figuring all this out.

In the case of monarchs, the science is clear. Monarchs need milkweed, and the widespread use of glyphosate is wiping it out. This knowledge gives the EPA an opportunity to muzzle a direct threat to butterflies. Immediately limiting the use of glyphosate and other herbicides and encouraging a more sustainable approach to farming can help ensure that the monarchs' astonishing migration will be an event that every generation can witness.

Lehner's most recent Op-Ed was "Cold Winters, High Bills, and a Need for Energy Efficiency." This Op-Ed will appear on the NRDC blog Switchboard. This post is part of the NRDC Wasteland series, featuring people, towns, businesses and industries that are finding innovative ways to cut waste, boost efficiency and save money, time and valuable resources. The views expressed are those of the author and do not necessarily reflect the views of the publisher. This version of the article was originally published on Live Science.