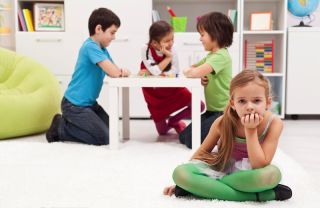 The new kid at school can often feel left out.
(Image: © Ilike | Shutterstock.com)

Kids who frequently change schools are more likely to hear voices, have delusions and experience other symptoms linked with psychosis in adolescence, new research suggests.

In the study, children who switched schools more than three times were 60 percent more likely to have such symptoms at age 12, compared with kids who made fewer school moves up to this age.

The study showed an association, and doesn't prove a cause-and-effect relationship between frequent school shifts and mental health problems. Still, it's possible that constantly being the new kid makes children feel vulnerable and socially defeated, excluded or marginalized, said study co-author Dr. Swaran Singh, a mental health researcher at the Warwick Medical School in England. That, in turn, could make mental illness a greater risk for these kids. [10 Facts About the Teen Brain]

People who feel marginalized — whether because they live in an immigrant community, face an unstable family life or suffer economic hardship — tend to have increased rates of psychosis. Studies have also found that children who move from rural to urban settings have a higher risk of hallucinations, delusions and other fleeting psychotic thoughts, Singh told Live Science.

While reading a study conducted in Denmark, Singh came across an offhand comment that suggested school moves might be part of the problem.

The researchers tested this idea using a huge dataset, known as the Avon Longitudinal Study of Parents and Children. That study enrolled more than 14,000 pregnant women and their children from Avon, England, starting in 1991, and followed them throughout the childrens' lives.

At age 12, about 6,500 of the children from this cohort were asked a series of questions about psychosis-like symptoms. Overall, about 5.6 percent of children in the study reported having fleeting hallucinations or delusions, and another 8.1 percent had suspected symptoms. (Though that may sound like a high percentage, in many children such symptoms disappear and will never develop into psychotic disorders such as schizophrenia, Singh said.)

Like children in the United States, those in England go through a typical series of school transitions, from nursery school to reception school (similar to kindergarten) to primary school.

But children in the study who went through more than three school moves were more likely than their peers to have symptoms such as hearing voices or believing their minds were controlled by others.

The results held even when the researchers accounted for other known risk factors of psychosis, such as family instability, being bullied or bullying, maternal mental health problems and low socioeconomic status.

It's possible that the feeling of being an outsider is so stressful that it primes the brain for future mental illness, Singh said. However, it could also be that some underlying factor, unaccounted for by the researchers, affected both the tendency to move and children's psychosis symptoms, Singh said.

That doesn't mean parents should never move their children from one school to another, Singh said. But perhaps school staff and mental health clinicians should keep a closer eye on the vulnerable new kids in school, Singh said.

The findings were published online Feb. 14 in the Journal of the American Academy of Child & Adolescent Psychiatry.