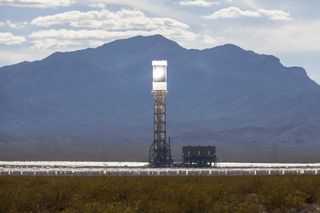 There's a lot to love about green energy, but officials at the Ivanpah Solar Electric Generating Station in Southern California are investigating a strange problem at their facility: dead birds with singed or burned feathers.

The operators of the plant, which uses about 350,000 mirrors to direct sunlight at water boilers atop 40-story-high towers, started finding dead birds at the facility even during its construction phase. The bodies of falcons, hawks, warblers, sparrows and other birds have appeared on and around the plant, The Wall Street Journal reports.

The death of some birds was expected, but the number of birds killed has surprised officials. Some biologists speculate that birds flying above the facility mistake the vast array of mirrors for a shimmering lake, then get burned when they fly too close to the installation. Temperatures around the towers can reach 1,000 degrees Fahrenheit (538 degrees Celsius).