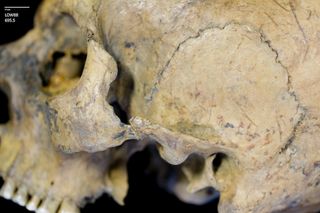 One of the skulls had a healed fracture in its cheek.
(Image: © © Heather Bonney / Museum of London)

A trove of skulls and other body parts unearthed in the heart of London may have once belonged to Roman gladiators, war captives or criminals, a new study suggests.

The remains, described in the January issue of the Journal of Archaeological Science, belonged to about 40 men, mostly ages 25 to 35, and were marred by violence: cheek fractures, blunt-force trauma to the head, decapitation and injuries from sharp weapons, said study co-author Rebecca Redfern, a curator and bioarchaeologist at the Museum of London. [In Images: Skulls of the Gladiators and War Captives]

Great Britain's ancient cities are littered with archaeological treasures, many of which are often dug up accidentally prior to construction. For instance, in 2013, the burial site of King Richard III was found under a parking lot in Leicester, England, and in April 2013, a medieval knight's tomb was uncovered under a Scottish parking lot.

The new site was excavated in 1988 prior to construction, and the skulls and remains of 40 people, along with scrap leather, were found at a marshy site in a pit.

During the Roman period, the area, near the London Wall, was filled with small timber workshops where shoemakers toiled. The site was also close to an amphitheater, and because of its proximity to a stream, it had religious and ritual purposes as well, Redfern said.

Due to a lack of funding, the skulls were never thoroughly analyzed but were instead taken to the Museum of London, where they languished for decades.

But after Redfern was tasked with clearing out the backlog of items in the museum's collection, she did a more thorough analysis.

Originally, Redfern and colleague Heather Bonney, an earth scientist at the Natural History Museum in London, assumed the skulls had washed up from a nearby cemetery after river flooding. But most cemeteries hold bodies of people who died at different ages, whereas these remains belonged to young men who bore marks of extreme violence.

Further analysis led them to conclude that the remains were put into a shallow pit that was deliberately dug outside a shoemaker's shop.

The ages and evidence of trauma suggest the Roman-era remains once belonged to gladiators, executed criminals or war captives.

In Roman-era England, it was common for headhunters to collect "trophies" from war captives: For instance, Hadrian's Wall was spiked with the heads of enemy soldiers.

"If you were considered to be a barbarian, [the Roman warriors] didn't actually regard you as human," Redfern told Live Science. "You were subhuman."

So the Romans ironically saw the displaying of barbarian, decapitated heads "as an expression of military power and the force of civilization," Redfern said.

Political criminals and gladiators were also decapitated, likely in the nearby amphitheater.

The team hypothesized that battle-scarred men may have had their heads on display for a while, and the remains were subsequently deposited into the pit.

"One of [the skulls] had a beetle-wing case up its nose," Redfern said. As the beetle type only lives in shallow, stagnant water, the skulls must have been sitting in the pit for a while, she said.

"It must have just stunk," Redfern said.