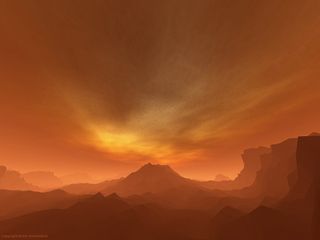 By mimicking in a lab the gases that could have been present on early Earth, researchers have concluded that a layer of haze blanketing our planet produced organic material that helped living organisms develop.

The haze, they found, resembles that of Saturn's moon Titan, demonstrating for the first time a long-held notion that early Earth and this mysterious moon supported similar atmospheric conditions.

When sunlight hits an atmosphere of methane and nitrogen, the ultraviolet light triggers chemical reactions that result in the formation of aerosol particles. These particles accumulate to generate a thick misty layer.

In the lab, scientists exposed methane gas to ultraviolet light, conditions similar to the hazy skies of Titan, as observed by the Huygens probe on Titan's atmosphere last year during the NASA-European Space Agency's Cassini mission.

They then added carbon dioxide gas to see if early Earth conditions could produce a similar haze.

"It turns out that organic haze can form over a wide range of methane and carbon dioxide concentrations," said study co-author Margaret Tolbert of  the University of Colorado at Boulder. "This means that hazy conditions could have been present for many millions or even a billion years on Earth while life was evolving."

The haze spreading over early Earth could have supplied the planet with more than 100 million tons of organic material annually, the researchers note this week's online early edition of the Proceedings of the National Academy of Sciences.

"As these particles settled out of the skies, they would have provided a global source of food for living organisms," said study co-author Melissa Trainer, also from the University of Colorado at Boulder.

The researchers believe that the vapory layer also protected the young Earth from harmful radiation and helped regulate climate.

Scientists still do not know exactly what triggered the onset of biology, however.