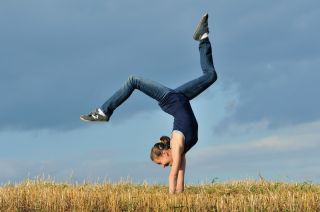 When I was the mom of two toddlers, I thought that I'd have so much less to worry about as the years passed. But now that my daughters are in their teens, I know that worry still exists – and it's still strong.

I no longer have to worry about them sticking fingers into electrical sockets or drinking something from under the sink. But I do spend time thinking about how their lives will be after they leave the house. Will they be happy? And more importantly, will they be healthy?

I surely hope so, and that's why I took comfort in the results of a European Heart Journal study published this month. The study indicates that teens who are more physically active may be less likely to suffer a heart attack later in life. The study was done on adolescent boys, but I can only imagine that regular exercise in these years is good for the girls too.

My daughters have always played sports and been active in other ways, and they have some good eating habits too. But what can you do if your teenagers seem to be following an unhealthy path? They are on their way to adulthood, so the teen years are a good time to cut off problem behaviors before they begin. [10 Ways to Promote Kids’ Healthy Eating Habits]

But, also because they are on their way to adulthood, it can sometimes be difficult to get through to teens.

Here are my tips for encouraging teens to be healthy: