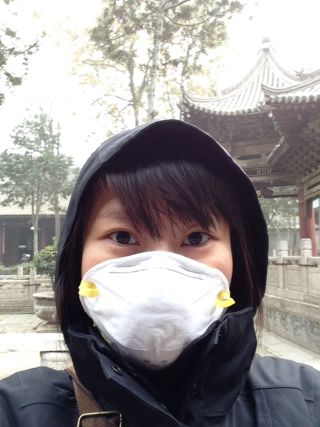 Christine Xu wears a mask to protect herself from the dense smog in China.
(Image: © Christine Xu.)

Christine Xu is a program assistant in the China Program and Energy & Transportation Program for the Natural Resources Defense Council (NRDC). This post is adapted from one that appeared on the NRDC blog Switchboard. Xu contributed this article to LiveScience's Expert Voices: Op-Ed & Insights.

Beijing is once again blanketed by record-setting air pollution — the highest since last January's "airpocalypse." Levels of PM2.5 (the kind of particulate matter, PM, that is most harmful to human health) reached 671 micrograms last Thursday morning, dramatically reducing visibility and prompting commuters to don industrial-strength face masks. In the past year, severe air pollution has increasingly plagued cities not just in the north, but all around China. Last month, reports of off-the-chart pollution in Hebei, Henan and Shaanxi Provinces, and Shanghai — traditionally a city with clean air — all made headlines.

My colleagues at NRDC and I have blogged extensively on China's air-pollution issues, but I had never experienced it personally — until now. Don't get me wrong. I have seen plenty of days in China with grey skies and no sun, but never has air pollution made my sinuses burn.

I travelled to Xi'an in Shaanxi province from Dec. 21 to Dec. 25, 2013, for vacation, hoping to bike along the historical city walls, climb the pagodas for a towering view of the city, and visit Mount Hua, one of China's Five Great Mountains.

Instead, I was greeted with a thick blanket of grey air that enveloped our plane as soon as we landed. When the smell of faint smoke filled my lungs upon exiting the aircraft, my friend from Beijing swiftly pulled out two face masks. She had been checking the daily Air Quality Index for Xi'an prior to our trip (a habit many Beijingers developed last year) and warned me about the severe pollution. But as the saying goes: seeing is believing.

The worst day was December 24, when PM2.5 levels neared 800, compared to the standard of 25 micrograms per cubic meter set by the World Health Organization. On that day, being outside without a face mask smelled like being near a forest fire or in a smoke lounge, so even though the masks were rather uncomfortable (imagine wearing swimming goggles around your cheeks), we didn't dare take them off.

Xi'an is a city with an incredible amount of history. It was the eastern terminus of the Silk Road, the capitol of China for many dynasties, and home to the Terracotta Army. It is also home to thousands of Hui people, an ethic group in China that is predominantly Muslim. The cultural intersection of Muslim, Buddhist and Chinese, and its influence on food and architecture, was fascinating to see. But frankly, with pollution this severe, it left us with few sights to truly appreciate, and a sour impression of the city.

That is a tragedy. What good is it if all of the historical cities and natural beauty in China are covered by haze? What good is staggering economic growth if the air is unbreathable, the cities unlivable?

The consequences of pollution are staggering. Environmental degradation costs an equivalent of 9 percent GDP for China. But even more startling is that air pollution reduces life expectancy by 5.5 years in northern China. After last January's "airpocalypse" thrust China's air pollution woes onto the world stage, tourism has been declining, expats have been leaving, schools have been closing (to protect vulnerable children), and air and vehicular traffic have been regularly stalled by low visibility.

While China's government has passed a host of aggressive regulations in response, recent news reported China to be behind in reaching its pollution reduction targets set under the 12th Five Year Plan, while skeptics question the efficacy of the measures taken to tackle air pollution. Peng Sen, Vice Minister of China's top economic planning agency, the National Development and Reform Commission (NDRC), said that China should try "all possible means" to reach those targets in the next two years.

We will see in 2014, and beyond, what types of concrete steps China takes to achieve its pollution reduction goals — though, a major challenge will continue to be setting effective political and economic measures to incentivize local officials to develop their economies without exploiting natural resources. In the past, local officials' promotions were based primarily on two things: economic growth and curbing social unrest. Now, President Xi is trying to steer them away from pursuing economic growth at all costs. Yet, details are lacking on how this will be implemented and how an official's conservation record will be measured; meanwhile, the Ministry of Environmental Protection remains understaffed and largely toothless.

Another major challenge to bear in mind is that a portion of China's emissions is directly tied to manufacturing goods for export to the United States. A new report published by Proceedings of the National Academy of Sciences found that air pollutants associated with China's export industry can travel across the Pacific to the western United States within days, leading to "dangerous spikes in contaminants." Thus, the importance of a concerted international effort on global pollution control, in addition to domestic action, cannot be overstated.

When I asked locals in Xi'an what they thought of the air pollution, their responses were unanimous: "Yes, the pollution is really bad, but nowadays, it seems like all of China suffers from it." Indeed, air pollution is not just a problem for Beijing anymore.

In fact, pollution has become the main cause of civil discontent and protests in China.

One positive trend already taking place in the new year is that China is adding an additional 87 cities to provide hourly air quality data, which the media, government and public will all be watching closely. Additionally, China is now requiring 15,000 of its biggest factories to publicly and continuously report their air emissions and wastewater discharges.

These are critical steps taken by the Chinese government at improving transparency and pollution-information disclosure. The challenge now is for China to make noticeable improvements quickly enough before public patience runs out.

The author's most recent Op-Ed was "Shark-Fin Soup Losing its Status as Shark Populations Decline." This piece is adapted from the post "A Vacation Tainted by China's Toxic Air" on the NRDC blog Switchboard. The views expressed are those of the author and do not necessarily reflect the views of the publisher. This article was originally published on LiveScience.