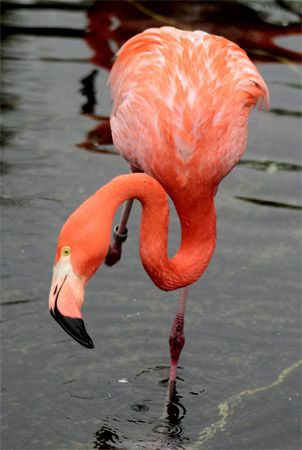 "This is an important piece of the puzzle when it comes to the bizarre way flamingos feed, a piece we didn't even know was missing," researcher Lawrence Witmer, an anatomist at Ohio University in Athens, told LiveScience.

Flamingos [image] essentially dine upside down. While standing in shallow water, they bend their long necks, tilt their bills into the water and swish their heads side to side. Their large tongues acts like a pump that beats five to 20 times a minute, sucking water into the front of the bill and then squeezing it out the sides. Fringed plates on their tongues trap food, such as shrimp, fish and algae,  in the circulating water.

Witmer and his colleagues were investigating flamingo jaws to better understand the evolution of jaw muscles in birds, lizards and dinosaurs. "By sheer luck we discovered something new about flamingos," said researcher Casey Holliday.

The scientists injected a colored mixture of latex and the metal barium into the blood vessels of a Caribbean flamingo that had died and was donated by the Brevard Zoo in Florida. A new computed tomography (CT) X-ray scanning technique was used to create a 3-D view of the bird's head [image] that highlighted blood vessel anatomy. This unexpectedly revealed large oval masses of erectile tissue located on the floor of the mouth on either side of the tongue [video].

Erectile tissue stiffens when filled with blood; this is what causes erections in mens' penises. The researchers suspect that in the flamingo's case, the erectile tissue strengthens and supports the floor of the mouth and tongue, providing stability as the birds dip their heads down to suck up food.

"Unlike a bony element, this erectile tissue is something that can be used on demand, that can go away when not needed. It's an interesting way to exploit blood vessels to build something useful, as opposed to simply supplying tissues and muscles with nutrients," Witmer said.

In the future, the researchers will investigate flamingo fossils "to see when this feature evolved," Witmer said. "Fortunately for us, this mass of erectile tissue starts to eat into the side of the jaw bone, leaving a little depression, so we can spot erectile tissues in fossils even if the tissues are obviously no longer there."

The scientists reported their findings in the October issue of the Anatomical Record.