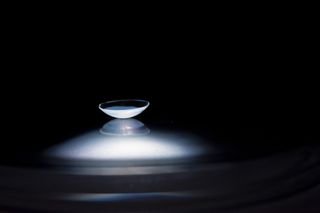 An experimental contact lens design releases a glaucoma medicine at a steady rate for up to a month.
(Image: © Peter Mallen, Massachusetts Eye and Ear Laboratory/Kohane Laboratory, Boston Children's Hospital.)

Like a miniature donut stuffed inside a tiny pita pocket, a common glaucoma medicine is sandwiched inside this specially designed contact lens. In laboratory experiments, the lens, which can also correct vision, releases the eyesight-saving medication at a steady rate for up to a month. Its construction offers numerous potential clinical advantages over the standard glaucoma treatment and may have additional applications, such as delivering anti-inflammatory drugs or antibiotics to the eye.

Glaucoma is a group of conditions that can result in irreversible blindness. This vision loss can be reduced if glaucoma is found and treated early, most commonly with eye drops to lower pressure within the eye. But using eye drops regularly can be a challenge. And while the drops can minimize further vision loss, they don't repair vision that's already lost.

People using traditional eye drops for glaucoma "aren't getting any symptomatic relief, and they're not seeing better, so there's not a lot of motivation to be compliant with the medication," said Joseph Ciolino, an ophthalmologist who, along with his mentor Daniel Kohane, developed the new contact lens at Harvard Medical School. [The 7 Biggest Mysteries of the Human Body]

What makes the new lens different from other prototypes before it, added Kohane, is the many-layered construction that places a ring of drug-releasing film in standard, FDA-approved contact lens materials. Other designs have most often used a pre-made lens dipped in a drug solution, which then leached out into the eye rapidly and inconsistently.

Kohane and his colleagues showed in an animal model that their lens delivered the glaucoma medication, latanoprost, safely and consistently for four weeks, at concentrations comparable to those achieved with daily eye drops. In the past, achieving such controlled drug release from a contact lens has been a major hurdle.

The researchers are now gearing up to test the effectiveness of the lens in additional laboratory studies, and they hope a Phase I clinical trial to test the safety and ability of the lens to reduce pressure in the human eye could begin in about a year.

This work is just one example of how scientists funded by the National Institutes of Health are developing biomaterials that can deliver vital medications and may have a range of other medical applications.

The research reported in this article was funded in part under NIH grants GM073626 and EY019686.