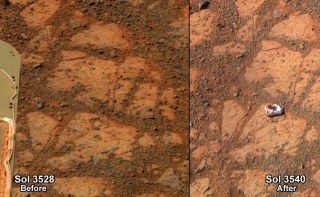 This before-and-after pair of images of the same patch of ground in front of NASA's Mars Rover Opportunity 13 days apart documents the arrival of a strange, bright rock at the scene. The rock, called "Pinnacle Island," is seen in the right image on Jan. 8, 2014. The image at left was taken on Dec. 26, 2013.
(Image: © NASA/JPL-Caltech/Cornell Univ./Arizona State Univ. )

A mystery rock on Mars that suddenly appeared in front of NASA's Opportunity rover may look like a tasty donut, but it is like nothing ever seen on the Martian surface before.

The strange Mars rock was spotted by Opportunity on Jan. 8 in a spot where, 13 days earlier, there was nothing. The rock, which scientists now call "Pinnacle Island," is white on the outside, red in the middle and appeared after Opportunity had just finished a short drive.

"It looks like a jelly donut," said Steve Squyres, the rover's lead scientist at Cornell University in Ithaca, N.Y., during a recent NASA event marking Opportunity's 10th year on Mars. "And it appeared, it just plain appeared, at that spot and we haven't driven over that spot." [Amazing Photos from NASA's Opportunity Mars Rover]

The odd rock is located in a spot on "Murray Ridge" along the wall of Endeavour Crater where Opportunity is spending the Martian winter. A closer look at the rock using Opportunity's robotic arm-mounted instruments revealed even more surprises.

"It's like nothing we ever seen before. It's very high in sulfur, very high in magnesium, it has twice as much manganese than anything we've seen on Mars," Squyres said with excitement in last week's Jan. 16 event. "I don't know what any of this means. We're completely confused, we're having a wonderful time."

Squyres said rover scientists have two working theories on how the Pinnacle Island rock mysteriously appeared near Opportunity. One suggests that the rock is a piece of debris from an impact crater somewhere near the rover that just happened to plop down in front of Opportunity, while the other theory is that the rock was kicked up by one of the rover's six wheels during its recent drive.

"That's the more likely scenario," Squyres said of the wheel-driven idea. "The crater ejecta one, I don't really believe. I think that the idea that somehow we mysteriously flicked it with the wheel is the best explanation."

Opportunity has been exploring Mars since Jan. 24, 2004, when it landed on the Red Planet a few weeks after its robotic twin Spirit. Both` rovers far outlasted their original 90-day mission, with Opportunity still driving today. Spirit's mission officially ended in 2011, several months after the rover stopped communicating with Earth.

Squyres said the weird Mars rock is an example of how the Red Planet keeps surprising scientists, even 10 years later.

"Mars keeps throwing new things at us," he said.

NASA has been celebrating the Mars rover mission's 10th anniversary in several events this month, including the Jan. 16 presentation that included Squyres, as well as a new Mars rover photo exhibit at the Smithsonian Air & Space Museum in Washington, D.C.

NASA will hold a press conference to mark Opportunity's 10th birthday on Mars on Thursday (Jan. 23) at 2 p.m. EST (1900 GMT). You can watch the Mars Opportunity webcast live on SPACE.com, courtesy of NASA.