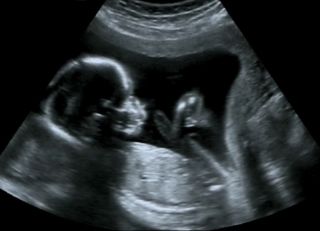 Skull theory, a method of guessing at an unborn infant's sex by looking at the shape of its head on ultrasound, is popular online, but not scientifically valid.
(Image: © CristinaMuraca | Shutterstock)

Parents dying to know their baby's sex before birth can typically find out with an ultrasound at 20 weeks. But if baby doesn't provide a full frontal view — or if parents can't stand to wait 20 weeks — any number of old wives' tales promise to give answers.

The latest of these, "skull theory," looks to the shape of the fetal skull. Supposedly, boys have larger, blockier foreheads, while girls' heads are rounder.

As fun as the guessing game might be, however, skull theory is for entertainment value only. There's no way to judge the sex of a fetus from the shape of a skull on a grainy ultrasound. [11 Big Fat Pregnancy Myths]

"It makes no sense," said Kristina Killgrove, a bioarchaeologist at the University of West Florida. Anthropologists and archaeologists can, in fact, tell the difference between adult male and female skulls — sometimes. But the skeletons of baby boys and baby girls just don't look that different.

"Until you get to maturity or at least puberty you just don't get these sexually dimorphic features of the skulls in males and females," Killgrove told LiveScience.

It's hard to say how skull theory got started. A few baby blogs mention it, but most of its online fame comes from pregnancy message boards, where moms-to-be post ultrasound pics and challenge each other to guess the baby's sex from the skull. Increasing use of early ultrasound may drive the trend: Many pregnant posters put up scans from before the 20-week appointment when sex is usually determined.

The ideas underlying skull theory, as found in various online posts explaining the methods, appear to be drawn from anthropological studies of adult skeletons. Male skulls are larger and blockier, while female skulls are more delicate and rounded. The forehead is more prominent in males, and the jaw squarer.

This is all true, to some extent, Killgrove said. The problem with applying it to fetuses is that the differences develop at maturity. Men are bigger than women, on average, with larger muscles, so the bony attachments that anchor these muscles are larger, too.

But even in adults, experts can't look at a skull and know sex for sure; they have to compare careful measurements of these features to averages across the entire population. Ethnicity matters, too. Modern Chinese men, for example, will be smaller and more slightly built than modern men from the Netherlands, the country with the tallest men, on average, Killgrove said. And there are grey areas. A particularly small man or especially bulky woman is hard to differentiate from skeletal remains alone, she said.

Even when examining adult remains, the skull isn't the best place to start looking for sex. It can provide useful information, Killgrove said, but the pelvis usually makes the strongest case for male or female.

"With the pelvis, there are certain features that seem to correlate with the different anatomy," she said.

To determine the sex of ancient remains of children and babies, researchers must turn to DNA analysis, Killgrove said.

Skull theory is not the strangest method people have come up with to guess at a baby's sex in utero. Many a mom-to-be has been told she must be carrying a boy because her baby bump sits so high; they also try to extract information from pregnancy cravings. (The old wives' tale holds that sweet cravings presage a baby girl.) Perhaps the strangest method is one suggested in the book " "Do Chocolate Lovers Have Sweeter Babies?" (Souvenir Press, 2013), which posits that moms carrying girls will watch their breasts swell larger than will moms carrying boys.