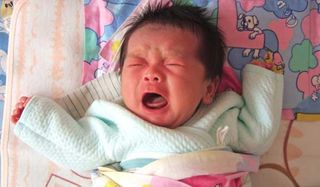 Parents sometimes think their babies cry just to get attention, and a new study from Japan backs up this notion: babies can "fake cry", the study says.

In the small study, a researcher analyzed the cries of two babies over a six-month period, looking for indications of emotion just before crying (including distressed sounds, grimacing, a downward turned lip, or a smile and laughter), and after crying stopped.

The children were nearly always unhappy just before they started crying, and after crying stopped. But in one instance, an 11-month-old infant showed positive emotions in the last few seconds before crying — which occurred when the mother moved away during playtime — and smiled again soon after the mother returned. [11 Facts Every Parent Should Know About Their Baby's Brain]

The infant "appeared to cry deliberately to get her mother’s attention and convey to her [mother] that she wanted her to come closer and play with her again," study researcher Hiroko Nakayama, of the University of the Sacred Heart in Tokyo, wrote in the December issue of the journal Infant Behavior and Development. "This appeared to be an instance of fake crying," Nakayama said.

The term "fake" should not be taken as a negative in this context, Nakayama said. The interaction that occurs when a mother responds to her baby's cries — even fake cries — "contributes greatly not only to an infant's social development but also to their emotional development," Nakayama said. "Infants who are capable of fake crying might communicate successfully with their caregivers in this way on a daily basis. Fake crying could add much to their relationships," Nakayama said.

The child who exhibited fake crying, called infant R, also had more episodes of real crying. This baby may have cried more because she had to compete with two other siblings for her mother's attention, while the other infant, called infant M, was an only child, Nakayama said.