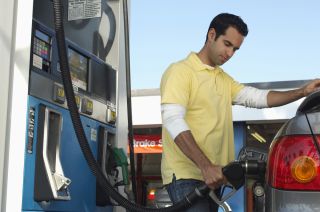 How often does the average motorist think about climate change? Not often enough, according to one California environmental group. The Bay Area chapter of 350.org wants all local gas pumps to display a label that states, "WARNING! GAS USE CREATES CLIMATE DISRUPTION."

"There's no immediate signal to a consumer of gasoline to show their effects on climate," Jamie Brooks, of 350.org, told the San Francisco Chronicle. "The goal is to create a signal saying, 'You need to change your behavior.'"

The labels, reminiscent of the health warnings now required on cigarette packs, have been proposed to city officials in Berkeley, San Francisco and other Bay Area cities. 350.org is named after the goal of reducing atmospheric carbon-dioxide levels to 350 parts per million — a level considered necessary to ward off climate change.