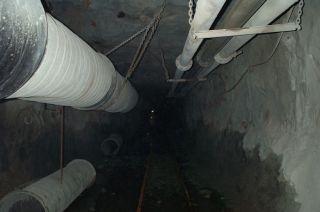 Scientists found a gold mine of bacteria almost two miles beneath the Earth's surface.

The subterranean microorganisms, a division of Firmicutes bacteria, use radioactive uranium to convert water molecules into useable energy.  Uranium is an element contained within the Earth’s crust and is an abundant source of energy.

The presence of such terrestrial organism raises the potential that bacteria could live beneath the surface of other planets such as Mars.

The researchers found the bacteria when they learned of a water-filled fracture [image] in a South African gold mine close to Johannesburg. Upon sampling the water they noticed something odd.

The water contained hydrogen and hydrocarbons that form when water exposed to radiation from rocks containing uranium breaks down. The age of the water and analysis of the microbes revealed that these bacteria parted from their surface relatives some three to 25 million years ago.

"We know how isolated the bacteria have been because our analyses show that the water they live in is very old and hasn't been diluted by surface water,” said lead author Li-Hung Lin, from National Taiwan University.  “In addition, we found that the hydrocarbons in the local environment did not come from living organisms, as is usual, and that the source of the hydrogen needed for their respiration comes from the decomposition of water by radioactive decay of uranium, thorium and potassium."

Scientists still don’t know how surface Firmicutes managed to make a home for themselves so deep in the Earth. However, they function similar to photosynthetic organisms that capture sunlight and turn it to energy for other organisms. This means that Firmicutes could support other microbial communities with the energy acquired from uranium.

"It is possible that communities like this can sustain themselves indefinitely, given enough input from geological processes,” said study co-author Douglas Rumble, a scientist from the Carnegie Institution. “Time will tell how many more we might find in Earth's crust, but it is especially exciting to ponder whether they exist elsewhere in the solar system."

The study is detailed in the Oct. 20 issue of the journal Science.