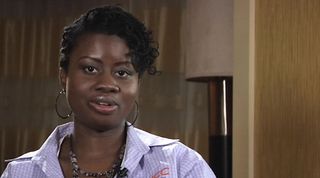 While companies create visually enhanced movies, TVs and videogames to capitalize on the public fascination with 3-D technology, Kyla McMullen, assistant professor at Clemson University's Human-Centered Computing Lab, works on 3-D technology not for the eyes but for the ears. It's called virtual spatial audio, and it helps people navigate their environment by locating sounds instead of objects. Just as a virtual reality might allow a person to immerse in a virtual world with a degree of depth perception, virtual spatial audio allows a person to experience an environment using just sound. Like, say, a pair of 3-D glasses you wear in the movie theatre, except for the ears.

She says she is creating a system of "prescription" virtual sound displays to help a person sort out which sounds are up, down, ahead or behind. The technology can be customized because people have different abilities to hear just as they have different abilities to see, she explained. Her research could assist workers in dangerous environments such as war zones or disaster areas.

Throughout her life, McMullen has sought to be a role model to younger African Americans and women, just as her high school teacher was for her. She was both president and vice president of The Society of Minority Engineers and Scientist's graduate program, as well as the vice president of the Movement of Underrepresented Sisters in Engineering and Science (MUSES).

Editor's Note: The researchers depicted in ScienceLives articles have been supported by the National Science Foundation,the federal agency charged with funding basic research and education across all fields of science and engineering. Any opinions, findings, and conclusions or recommendations expressed in this material are those of the author and do not necessarily reflect the views of the National Science Foundation. See the ScienceLives archive.