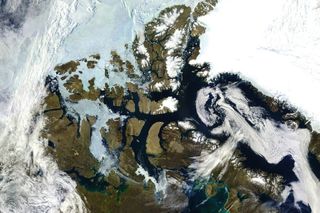 In 1959, Paul T. Walker, an American glaciologist, buried a message in a bottle under a pile of rocks on Ward Hunt Island, in the northernmost part of the Canadian Arctic. Fifty-four years later, researchers who set out to collect microbes on the remote island stumbled upon the message from the now-deceased Walker, reported the Los Angeles Times.

The message, tucked under a man-made stone structure known as a cairn, read: "To Whom it May Concern: This and a similar cairn 21.3 feet to the west were set on July 10, 1959. The distance from this cairn to the glacier edge about four feet from the rock floor is 168.3 feet.

Walker, 25 at the time, suffered a stroke in 1959 while on an Arctic expedition. Left paralyzed, he was rescued by a bush pilot, but died in November at his parents' home in Pasadena, Calif.

"We were reading some of his last words," said Warwick F. Vincent, director of the Center for Northern Studies at Laval University in Quebec City, and one of the researchers who found the message, according to the LA Times.