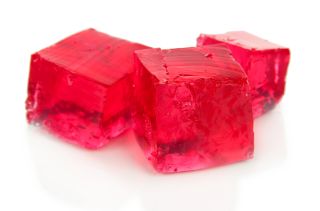 Jell-O is a sweetened gelatin product made by boiling the bones and hides of animals.
(Image: © Africa Studio / Shutterstock.com)

Sold since 1897, Jell-O has occupied a familiar place on American dinner tables for decades. But what is Jell-O made of?

"Jell-O" is actually a brand name, currently owned by Kraft Foods, and is used to market a range of desserts and snacks. But most people use the term to refer to the gelatin-based desserts that are also sold under the "Jell-O" name. Those consist of gelatin, in addition to colorings, sweeteners and other flavorings, such as strawberry, orange and lime.

Gelatin itself is a collection of long, stringy animal-based proteins called collagen, which bond together in three-stranded helical structures — similar to the two-stranded helices of DNA.

Urban legends claim that gelatin comes from horse or cow hooves, though that's not exactly true. The collagen in gelatin does come from boiling the bones and hides of animals processed for their meat (usually cows and pigs). But hooves consist of a different protein, keratin, which can't produce gelatin.

To make Jell-O, you need to heat the gelatin in water. Heating breaks the bonds holding the collagen together. Next, the heated water-gelatin solution must be cooled, allowing the collagen strands to rebond in a network, but now with water trapped inside. The collagen network gives Jell-O its semisolid properties, while the trapped water keeps it jiggly.